Losing by More Than a Nose

We know from Parson Weems that young George Washington chopped down a cherry tree and, when confronted by the fact, bravely said to his father, “I cannot tell a lie.” History does not tell us what happened to the unfortunate piece of wood that young George cut down, but of this we can be certain: it did not turn into a lying, conniving, mouthy puppet. 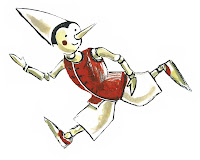 And so, having drawn this tenuous link between two of history’s more famous wooden limbs, we turn our attention to the Minnesota Opera’s presentation of Jonathan Dove’s The Adventures of Pinocchio, which played here this week. We cannot tell a lie: it did not work for us.

First, the good news: this is a gorgeous production. Imported from the Leeds Opera in England, Pinocchio runs through a staggering twenty scenes during its three hours and two acts, and Francis O’Connor’s highly imaginative sets run the gamut from the interior of a forest to the inside of a whale, without so much as a stagehand running around pushing a piece of scenery. It cost the Minnesota Opera a bundle to bring the whole thing over from across the pond, and it was worth it.

Good words must be offered, too, for the astonishing performance of Adriana Zabala as the wooden-headed Pinocchio. On stage for virtually the entire performance, Zabala sings, dances and runs her heart out, managing all the while to convey the jointed movements of a puppet (not to mention the prosthetic nose which she wore for all but the final transformation scene).

For that matter, the cast as a whole did a pretty good job, although the lyrics frequently failed to make their way to the upper balcony at the oft-lamented Ordway. Thank goodness for supertitles, although one has to wonder once again why they should be necessary for an opera sung in English. Perhaps the Ordway’s notorious acoustics let us down once more, or possibly the notes were getting caught in that elaborate set, although people on the main floor seemed to hear all right. Good tidings as well to the orchestra, under Anne Manson’s baton, which turned in a very capable, if occasionally loud, job.

So where did it all go wrong? Well, first things first – dare we suggest that perhaps Pinocchio is just not all that appealing a character? He’s lippy, headstrong, foolish, deceitful, stubborn – in short, hard to like. We’ve been told from the outset not to expect that other Pinocchio, e.g. Walt Disney’s. And it is true that Disney’s version did much to sanitize Collodi’s dark and cautionary piece. But one thing it did accomplish was to present the irrepressible charm that even the most conniving little boy often has, and maybe that’s something you just have to depend on a cartoon to provide.

Mind you, it’s not that we doubt Pinocchio’s sincerity when he tells Geppetto and the Blue Fairy how much he loves them. But we’ve seen him do so many stupid – not to mention dishonest – things, it’s just hard to take him seriously. For example, after having been conned for the second time in three scenes by the conniving Fox and Cat, a court sentences the puppet to three months in prison for being so easy to fool – and you want to shout, “Good! Leave him in there!” (Not, perhaps, a very charitable attitude to take, but then opera audiences have not always been known for their charity.)

And this brings us to our biggest complaint: the sheer size and length of Pinocchio. (And no, we’re not talking about the nose here.) It runs, as we said, for three hours – longer tha

n Tosca, longer than Das Rheingold, longer than Salome or Elektra or The Barber of Seville. Does one really need three hours to tell the story of a puppet?

Apparently one does, when trying to faithfully adapt Collodi’s original story. And it should be said that Alasdair Middleton’s libretto is a marvel; witty, literate and clever, one couldn’t help but be reminded of Eliot, or perhaps even Cole Porter. But it is, shall we say, very thorough. Forty minutes could easily have been chopped from this story without missing a beat. And in trying to cram all these somewhat unconnected episodes into the story, it necessitates rushing through many of them. When that happens, character development is bound to suffer. Pinocchio leaves us unaffected because we never really get to know him. His transformation and redemption at the end of the opera should be stirring and touching, but it isn’t. Pinocchio may be made of wood, but – like another Woodman, that from the Wizard of Oz – what he really needs is a heart. It’s hard to describe, how a three-hour opera can be too long and yet still feel incomplete, but there it is. Everything whizzes by too fast; it’s ADD night at the Ordway, Sesame Street goes to the opera. We were promised a fast-paced story, but this is almost frenetic, and there is a difference.

And, as we must be honest, Jonathan Dove’s music just wasn’t all that interesting. Big, bold and often brassy, it resembled John Williams more than, say, John Adams, lacking in subtlety and occasionally drowning out the singers (although, as we mentioned, there could be other factors at work). There wasn’t much there that tugged at the heartstrings, which is vital in a story that revolves around the trials and ultimate redemption of Pinocchio. It was virtually all recetitive, meaning there were no arias, few portions that could stand as excerpts, little in the way of hummable melodies that one could take from the opera house (save the four-beat “Pin-oh-key-oh” theme that, upon closer inspection, was reminiscent of that 60s song Aquarius). As we’ve said, Pinocchio just isn’t a very likable character; but a lot of opera heroes and heroines can be hard to take, and yet their operas still work because of the music. That didn’t happen here.

This was thoroughly modern music, but in an uninteresting way; and to the extent that one could detect signs of such 20th Century composers as Stravinsky, Puccini, Menotti, Britten or Rorem (personal favorites all), it was merely to remind us that Dove doesn’t measure up. Had it been done in, say, the Italian style that would seem to suit this story – but then, what is the use in dealing with what-ifs?

So what did we have? It was too much like pop to be classical, too much like a musical to be an opera, but in reality it was none of the above. Musical theater, one could guess, would be as accurate as you might get; but even that description, like this opera, is unsatisfying. We were told not to take it too seriously, to have fun with the production, and it’s evident that those behind the scenes and on stage, as well as many in the audience, followed that advice. But even fun sound and fury still signifies nothing.

In the end, The Adventures of Pinocchio is not the story of a puppet longing to be a boy; it’s that of a fairy tale longing to be an opera. And failing.

For, as we said, we cannot tell a lie.
Email ThisBlogThis!Share to TwitterShare to FacebookShare to Pinterest
Labels: Classical Music, Minnesota Opera, Opera, Review