by Mitchell Hadley
One of the added benefits of combing antique stores in search of TV Guides is that in the meantime you can run into the most fascinating things.

Take this magazine: it's called "The Community Magazine," and it's from Albert Lea, a town in southern Minnesota.  "The Community Magazine" is one of those free magazines you get in supermarkets, and it's about what you'd expect: television listings for the month, a few local columnists and notes, and advertising.  Mostly advertising.  Which, in this case, is a real treasure trove for the cultural archaeologist.

This is the January 1963 issue, which means that it would have come out sometime in December 1962.  As such, it's the last chance for advertisers to wish their customers the greetings of the season.  And herein lies the tale.  I picked this up a couple of years ago, and since then I've been dying to scan in these images.  Taken collectively, it presents a remarkable slice of life from the early 60s.  It was a time when religion was an accepted - no, a necessary - part of the public square, and when the PC police hadn't ridden Christmas out of town in the name of "diversity."  (Insert gagging noices here.)  Granted, we're talking about what might be referred to as "Small-Town America," but no matter how you look at it, it's a real document from a real time, one that sadly seems far away today.  (Click on the images to see larger versions.)

Here is the cover of "the Community Magazine," in festive green and red, with a Dickensian-styled family gathered around the table for Christmas dinner. 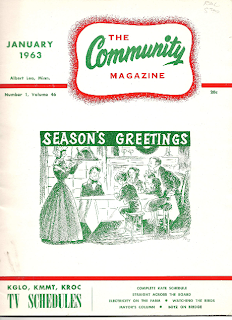 This ad is mind-boggling for a couple of reasons.  First, it's brought to you by "your servants in government" - that sounds kind of quaint, doesn't it?  What's even more stunning is that it not only specifically wishes people "Christmas Joy," but it features the Three Wise Men.  Can you imaging a government agency using this kind of symbolism today? 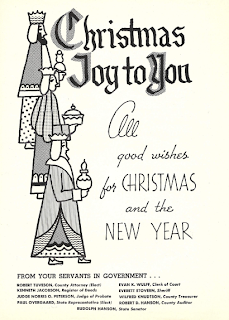 ﻿
Religious symbolism is a running theme throughout these ads.  I'd go to them for a loan.  (Do you think it was an accident that a financial institution would go for images of gold, frankincense and myrrh?) 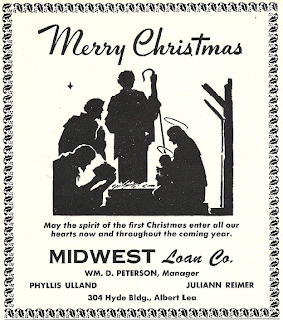 Here's another example.  Sorenson Lumber is doing more than advertising their business; they're telling you something about the kind of people that run the company.  I don't know anything this company (a quick Google search didn't tell me much), but I wouldn't be surprised to find out it was a family business. 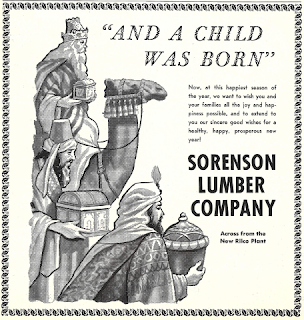 This ad is from the local Skelly gas station.  Werner Wittmer doesn't leave you in any doubt as to what they think Christmas is all about. 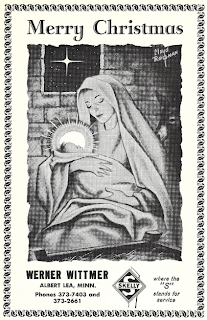 Not every ad in this issue has an explicitly religious motif, but it's hard to look at a candle without thinking of "The Light of the World."  By the way, we don't see candles in Christmas decorating like we used to - when you find them nowadays, it's mostly as part of retro-themed advertising.

Stay turned throughout the rest of the week as we continue leafing through the pages of "The Community News," and see how America used to celebrate Christmas. ◙
Email ThisBlogThis!Share to TwitterShare to FacebookShare to Pinterest
Labels: Christmas