The (heart) break of dawn 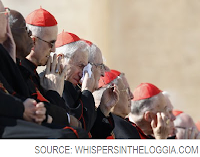 It would be hard to imagine a day more emotional than yesterday, when Benedict XVI made his final public appearance in his Wednesday General Audience.  For all the talk, all the discussion, all the controversy - yesterday was the day of heartbreak, when it all started to become real.  Perhaps it was the shot at the right, of many of the Cardinals in attendance overcome by emotion.  Perhaps it was the caption on EWTN's live coverage, which read "Final General Audience of Benedict XVI."

Usually we don't have this knowledge in the Catholic Church - sure, in the last days of John Paul II and Paul VI and John XXIII we knew that the end was near, that it wasn't long now - but this was so different.  The Holy Father standing before us, giving his love to his flock and receiving theirs in return, everyone knowing that this was the end (or near it) and yet he was still with us, among us for the time being.  It was a scene of indescribable drama, which is why these words themselves do so little to encapsulate it.  Benedict's farewell tour of St. Peter's Square, jammed with over 200,000 people coming to say goodbye - again, we don't generally get the chance to say goodbye to our popes, and after witnessing the scene one can understand why so many people hate goodbyes. 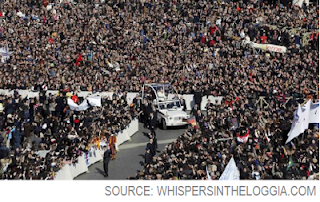 And now begins the time of Benedict's martyrdom. I mentioned in yesterday's Opera Wednesday having recently seen the opera Assassinio nella cattedrale, Pizzetti's adaptation of Eliot's Murder in the Cathedral, in which Thomas Becket faces down his impending death at the hands of Henry II's henchmen.   I do plan to write about this opera next week, because it is timely on so many levels, but here a word or two seems appropriate.  I mention Benedict's martyrdom, because when a man becomes pope his old life dies, and he is (in a sense) reborn into a new ministry, a new relationship with both God and man.  Some of the traddies who've been having kittens about Benedict's abdication sputter "He can't do this!  He's supposed to die as pope!"

What they miss, I think, is that in abdicating the papacy Benedict is dying, in a sense.  He is laying down his new life - that of being pope - in order that his people might be saved from what he sees as a grave threat, one that requires a younger and more physically vigorous man to act as shepherd.  He is, in other words, laying down his papacy for love of his flock.  He now becomes evermore a man in this world, but not of it.  He enters into a new and likely deeper relationship with God, uniting himself through prayer, continuing to lead - but in a new, perhaps more profound, dimension.

And as we continue through this penitential season of Lent it might do us some good to pause for a moment and consider how we, his most difficult sheep, have contributed to this drama.  In the Good Friday liturgy it is the congregation who assume the role of the mobs at Christ's Passion, and we are given the lines "Crucify Him!  Crucify Him!" It is an uncomfortable moment to be sure, because it strikes so close to the bone.  So perhaps we should all take time to think of how we've helped to create the martyrdom of Benedict, through our disobedience, our obstinance, our so often hearing his words but not listening to them.

Benedict reassured us yesterday that "I do not abandon the cross, but remain in a new way near to the Crucified Lord."  John the Evangelist reminds us that when Christ came into the world His people knew Him not, and I think it's fair to say that many (most? all?) of us have helped to drive a nail or two into the Cross that Benedict now carries.

In the Western, the great American contribution to storytelling, the story usually ends with the hero walking into the sunset.  This is oftentimes a bittersweet moment in the movies, for while the hero may emerge triumphant, he frequently does so at great human cost.  Today, Benedict himself will walk into the sunset, his papacy done, his work just beginning.  I began this piece by saying that it was hard to imagine how today could be more difficult than yesterday.  But, at 2:00 ET this afternoon, the reality will sink in.  We will be in sede vacante, the papal crest will change, and we will be left to wait and pray that we get the pope we need, not the one we deserve.  And though I am not an emotional man, it will be difficult to restrain a lump in the throat, a tear in the corner of the eye, for as the reality sinks in, we will all find out just how much more difficult the day can be.

UPDATE: For a touching tribute to Benedict's papacy, I recommend this article from Rorate-Coeli.  ◙
Email ThisBlogThis!Share to TwitterShare to FacebookShare to Pinterest
Labels: Benedict XVI, Catholic Church