Of a Man on the Moon

One of the marks of a good writer is, I think, knowing when to shut up and let someone else's words do the talking for you. So today I was all set to share my memories of 40 years ago, and then I find that someone has already beaten me to the punch! 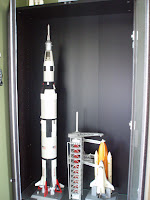 So go read Fr. Zuhlsdorf's account of that day when the unthinkable became a reality, when man first set foot on the moon. Like him, I was nine years old that summer (go ahead, do the math - I'll wait); I may not have ridden the bare-backed horses nor taken a dip in the swimming hole, and the ball team of my youth was the major league Twins, but we built the same models and dreamt the same dreams of traveling to planets far away. Like him, I sat transfixed that night in front of the television, watching the same picture, and I stood outside and looked at the same moon.

It is, I know, hard for many of you to believe - that there was a time when 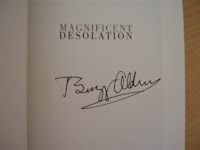 space travel was not taken for granted, when man on the moon was not a fact of life. In the same way that I have always lived with television and air travel, you cannot fathom a time when the moon landing was not already a part of history. And yet there was that time. The astronauts were heroes to us all then, and - even 40 years later - you can still get a thrill from meeting someone who actually set foot on that distant surface.

I could say more - but why bother, when someone else has done it so much better? Read Fr. Z, and share the experience of that nine-year-old boy on that night when, millions of miles away, a man took a step into history and brought all mankind with him.
Email ThisBlogThis!Share to TwitterShare to FacebookShare to Pinterest
Labels: History