As I looked at Mark Sanford's sexcapade scandal, I was reminded that this was reminiscent of King David's infidelity (Bathsheba) that put him in trouble and resulted in more scandal that led to the deaths of children in the family and even his son turning on him later. But the Governor's scandal had me thinking of Donna Rice, the woman behind the scandal involving Democrat Senator Gary Hart (Colorado) in 1987, who was on the Monkey Business when the scandal erupted.

Now I must disclose that I actively help Donna Rice in 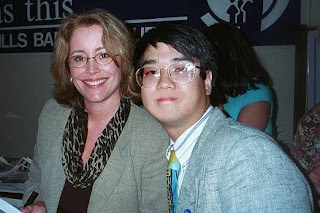 her fight against Internet pornography, and not only did I hear her speak of the issue, she and I are graduates of the same university. Mrs. Hughes is now head of Web Wise Kids.
Email ThisBlogThis!Share to TwitterShare to FacebookShare to Pinterest
Labels: Politics, Religion