by Our Word
As some day it may happen that a victim must be found,
I've got a little list — I've got a little list
Of society offenders who might well be underground,
And who never would be missed — who never would be missed!
There's the pestilential nuisances who write for autographs —
All people who have flabby hands and irritating laughs —
All children who are up in dates, and floor you with 'em flat —
All persons who in shaking hands, shake hands with you like that —
And all third persons who on spoiling tête-á-têtes insist —
They'd none of 'em be missed — they'd none of 'em be missed! 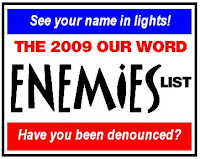 The purpose of the 2009 Our Word Enemies List is, of course, to be entertaining. But after all the fun, keep in mind there's a serious side to it as well. Many of the names on this list - people, institutions, organizations, and other various flora and fauna - are, as O'Rourke said of those on his list, "useless, politically disgraceful, and downright foolish." For all the good points they may have, they've done at least one thing that merits being denounced, at least by someone. That doesn't mean they're necessarily bad people, although some of them come pretty close. We're not trying to attack them personally, even though many of them have no reservations about doing so. Some of us may even venture a few constructive suggestions as to how our honorees can avoid a repeat appearance on next year's list.

Happy reading - and if you're so inspired, feel free to email us with your list of enemies. As long as none of us show up on it, we'll be glad to share.

If you're a regular reader of Bobby's columns, you'll recognize many of the names he offered. Whether they're from the world of politics, sports, entertainment, or "culture," they all have one thing in common - they've made the list based on merit.

Barack Obama - Chicago-style politics and now the idea of seizing political opponents who contributed to his opponents (see the automakers; Wagoner and Nardelli gave to Romney). The late Peter Tomarken would probably have said to America, (Foghorn sounds) "Stop at an Obammy!"

Leo Hindrey Jnr - Even though he owns the Nelson Bible publishing house, he is responsible for corruption (Daschle's tax situation) and printing bad theology.

Rick Warren - The kingpin of the life enhancement instead of God's Word "churches" that are too prevalent anywhere.

Luc Bondy - What he did to Tosca.

Nancy Pelosi - For imposing her totalitarian regime that led to Joe Wilson's complaints.

MTV - For causing the demise in morals, standards, and music. Witness the rapid demise in church music.

Title IX - For becoming a Quota Queen, making boys second-class citizens in our schools, and telling boys there is no place for them to play sports because the percentage of boys to girls in the school is not enough.

Al Franken - For helping South Carolina, Georgia, and Alabama become irrelevant in the Senate.
Susan G. Komen Foundation - For promoting Pink Sunday in churches to fund them. To declare Pink Sunday relevant and supporting abortion is not a church.

ESPN - For the idea of bad sports coverage, and to make college football for the worse by the premium television package that I believe will lead to pay-per-view BCS Championship Football. And what was with the crazy Monday Night Football gimmick of Bocephus en español during the opening?

Judie's list also includes names from the world of opera and sports. It's short, but to the point. She upbraids:

Peter Gelb, who simultaneously brought thousands of viewers to the Metropolitan Opera thorugh HD transmissions and gave them nothing to see.

Mike Hill, the ESPN announcer who helps each night to ruin the English language with his mispronunciations of words beginning with "ST" by inserting an "H" in between. Got that shtraight?

And, of course, a woman who truly desrves to be denounced - Oprah Winfrey [only Elvis goes by one name around here], for making men believe that she knows what women think.

[Well, Judie, now she knows what at least one woman thinks.]

*****
Are we having fun yet? Yes, we know, too much of anything - even an enemies list - isn't necessarily a good thing. That's why you'll have to wait for part 2. Hope you can stand the suspense. And for those of you who haven't seen your names pop up yet - well, you've still got at least twenty-four hours to mend your ways.
Email ThisBlogThis!Share to TwitterShare to FacebookShare to Pinterest
Labels: Culture, Enemies List, Politics, Pop Culture, Sports, Television