On the links, Timberlake a modern-day Crosby, Williams, Hope, or Thomas

by Bobby Chang
This weekend marks golf with a turn of the past.

The Hope is the only tournament with a celebrity name still attached, for aesthetic reasons. 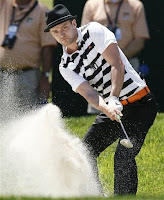 In Las Vegas, of all places, no less, golf is back to its old tricks. Former “N’Sync” member and controversial pop “singer” Justin Timberlake has the third renewal of his version of the old celebrity name golf tournament when this week’s PGA Tour Fall Series event (the penultimate of the 2010 PGA Tour season), tees off Thursday in the Justin Timberlake Shriners Hospital for Children Open. The tournament, shortened to four rounds in 2003 and adopting its current name in 2008, was known as the maiden-breaker for a certain golf legend when it was a plain five-round Las Vegas Classic fourteen years ago. The Timberlake is to contemporary golf fans what those names of the past were in golf from three decades ago, as celebrity-named tournaments seem to have gone by the wayside. But it's good to see today's generation appreciate the past with this type of event.

But in an era of golf tournaments with fancy corporate names, this week’s golf stop is reminiscent of an era long gone in that we have a celebrity-named tournament and the celebrity and his friends are in the pro-am tournaments. ◙
Email ThisBlogThis!Share to TwitterShare to FacebookShare to Pinterest
Labels: Sports