by Mitchell Hadley
An election day look at the headlines:

Thomas Sowell: The multicultural dogma that we must accept every culture is inane.

Sowell again: How the cult of multiculturalism has failed miserably.
Dennis Prager: Why voting for the individual, not the party, is an idealistic daydream.

By the way, if you look at the Nixon commericial I excerpted on Friday, you'll notice one of the more memorable taglines (if somewhat grammatically incorrect) of recent political commercials. 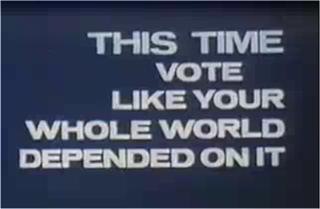 It was, of course, an allusion to Nixon's 1960 loss to John Kennedy (this time, don't vote for the handsome face, the glib words, etc.), but it also emphasized the sense that the stakes were high - very high - in this election.

One could say the same thing this year.  There are those, and I have been one of them in the past, who would say that there is little difference between the parties: that they're flip sides of the same coin, that they'll stab you in the back once they get into office, that nothing really changes.  There's a lot of truth to that, which is why it's so important to be part of the process - to hold their feet to the fire, so to speak, to make sure that our leaders do what they say they'll do or we'll throw the bums out.

But the stakes are indeed very high this year.  It's one of the biggest off-year elections I can remember, certainly the biggest one in many years.  I think by the end of the evening the Democrats will find out that they badly misread the public mind from two years ago.  That election was not about giving the liberals a mandate; rather, it was about a charming snake-oil salesman who was able to fool most of the people for a little bit of time.  But that time is up, or at least halfway up, and tomorrow morning the battle for 2012 will begin in earnest.  It will now be up to the Republicans to make sure they do not commit the same mistakes as the Democrats.  Remember, this election is not about you, it's about a public fed up with the big government leftism of the other side.  If you don't deliver on your promises, the same fate awaits you.

But the best way to enjoy the fun tonight is to have a rooting interest in the outcome.  So get out there today and vote as if (grammatically correct) your whole world depended on it.
◙
Email ThisBlogThis!Share to TwitterShare to FacebookShare to Pinterest
Labels: Politics