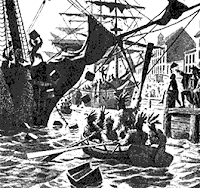 Taxation that was imposed on the Colonies in the 1760's and 1770's infuriated colonists, who protested, and by 1773, taxes on tea were the only ones remaining, with a monopoly imposed. The infuriated colonists launched a raid on the tea in Boston, leading to the famous Boston Tea Party of 1773. The resulting furore over the protests led to a British attack called the Coercive, or Intolerable Acts.

In the past two years of the Pelosi-Reid-Obama triumverate, we have seen a series of Intolerable Acts of the 21st Century, aimed at a modern mostly conservative protest organisation whose name was derived by CNBC's Rick Santelli on February 19, 2009, knowing of the history of the United States 235 years ago. The result was the birth of the modern Tea Party Movement, protesting against the Left's numerous policies of the past 45 years that has left this country in a lurch, and sending modern Americans to reliving the “spirit of 1773” with this protest.


In the spirit of 1773, it seems Congress has agreed to be the English and pass Intolerable Acts to stop their opponents. A no debate, no discussion, follow the Dear Leader Congress has continued with this action.

The list of Intolerable Acts of the Administration includes:


It seems from this list that Congress has once again intruded with a modern series of the Intolerable Acts, passed to please the Modern Left's sexual deviants, illegals, socialists/communists, and environmentalists while attacking the Tea Party whose protests lit up America's airwaves. The Boston Tea Party infuriated England, resulting in the Intolerable Acts of 1774. This Congress has written many intrusive and wrong laws that have created the Intolerable Acts once again, passed to attack the Tea Party, which successfully won the House, in that the Lame Duck Congress specifically to attack those who won the election by imposing their agenda before the new Congress can act.