Of disgraceful Grammys, MTV, HBO, and the music we sing

by Bobby Chang
Since the Super Bowl XXXVIII incident in Houston, NASCAR has used a money and points (or laps if in-race) penalty system as a crackdown on obscene language. In 2004, Johnny Sauter, Ron Hornaday Jnr (both NNS), and Dale Earnhardt Jnr (NSCS) were each fined $10,000 and 25 points penalties each for use of improper language on-air in broadcasts. Two years later, Kevin Manion (NSCS) was punished for an obscenity with an ejection penalty, ejecting his driver from a race, costing more than 25 points. By 2007, Tony Stewart (NSCS) was awarded a $25,000 fine with the 25-point penalty for another obscenity. In 2008, Chad Walter (NNS) was fined $10,000 and the entire Dale Earnhardt Jnr #5 NNS team punished with a 25-point penalty for an obscenity. In November, Kyle Busch (NSCS) was fined $25,000 when he signalled an obscene gesture towards an official where NASCAR threw a two-lap penalty that was worth more than 50 points.

The penalty system reminded me of an article from Dennis Prager on National Review about the demise of music after he reviewed the 2011 Grammy Awards nominations for the coarse, fine and points-worthy language of these ditties, considering the nomination of songs and albums with such $25,000 words when 25 years ago, people were winning $25,000 atop an Egyptian tomb when the World Oldest Teenager said, “Here is your first subject, GO!”. Mr. Prager noted MTV has destroyed the youth of this country since its development in 1981 because of music video scenes that are shown for less than two seconds, and explicit imagery and talk on such programming. He also noted the National Recording Academy for the Arts and Sciences voted to support such language, which in my view is reminiscent of what has happened to the Emmy Awards since HBO and Showtime, which have won the majority of key Emmys with programming that features coarse language and illegal for network television scenes.

MTV has destroyed music in more ways than you can expect. Instead of hearing pipe organs playing serious sacred song, today's dominant churches (life enhancement centres actually) are playing the same level of rock music with emotions, and the tunes have no Biblical message. Some of the songs are outright secular and inappropriate. Still others are excessively loud that it violates OSHA standards. We've seen a demise in wonderful music in the church since the MTV generation's control, and it shows when kids would rather dance to “Spirit in the Sky” (with a blasphemous reference), any ditty of the prosperity gospel promoted by “Smiling Joel” Osteen, or even sing the incorrect theology of the “Wailing Women and Moaning Men”.

What is promoted by MTV through their various networks is downright disgraceful. I cannot picture myself listening to any of the inappropriate trash that is called “Grammy Worthy” when I have found myself in an era where classical music, and operas, have become part of my musical culture, especially since I attended a Charleston Spoleto performance of Susan Patterson as Manon Lescault ten years ago this coming May, followed by years of vocal training that has sent me to many sacred and secular works from the world's greatest composers. 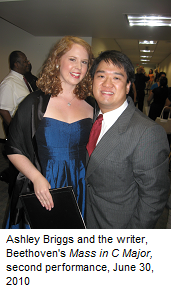 There's a clear difference between sitting in the tenor section of the choir after you've finished your first long “Kyrie Eleison” then hearing Ashley Briggs sing a long and beautiful “Kyrie Eleison” from the opening of Beethoven's Mass in C Major and hearing Thomas Calloway, Marshall Mathers, Robyn Fenty, or Shawn Carter and their $25,000 obscenity-laden ditties. Which one is more suitable for a family? Which one is more suited to be heard? Which one would children prefer? The unfortunate issue is today's generation prefers the bleep-a-tenth and the inappropriate content of modern rock music, and not the beauty of Beethoven. Obviously, as the photo from the concert shows, there's a songbook for both of us and my direction is one way.

The content of the 2011 Grammy Awards with its excessive use of inappropriate language is concerning, and does not fit in the wheelhouse of us who have attended, read, or sung classical music, considering what is featured. Mr. Prager is correct. The Grammys, and all of pop music today, is such a disgrace for the questionable material that is being nominated. Yet we have generations in church who think it's more acceptable than the serious church music that we've sung. ◙
Email ThisBlogThis!Share to TwitterShare to FacebookShare to Pinterest
Labels: Culture, Music