by Mitchell Hadley
Back in the day, New Year's meant four things: Guy Lombardo at night, hangovers in the morning, the Rose Parade, and college football.

People change, and times change. Guy Lombardo has long since gone to his eternal reward, but the hangovers are still around. The Rose Parade is now in HD, probably soon to be 3D. The big sporting event now is an outdoor hockey game, and although the bowls are still going, the big game doesn't come along until a couple of weeks later.

The first thing you'll notice is that they seem to be celebrating New Year's on January 2. That's because the 1st fell on a Sunday, and traditionally the parades and games would be moved to Monday.  They still are, in fact; you'll see that on New Year's, 2012. 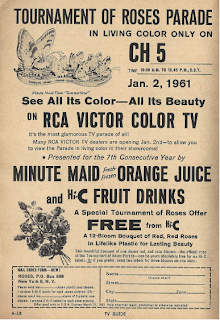 Imagine what it must have been like to watch the Rose Parade in black-and-white.  Yet that's the way it was throughout the 50s; NBC, the pioneer in color broadcasting, is the only place you'll see the flowers in living color in 1961.  And don't forget to send in your order for those lifelike plastic roses. 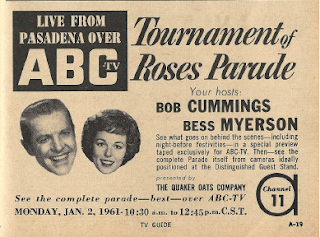 Ah, Bess Myerson. The former Miss America was a sophisticated beauty, and a staple on game shows such as I've Got a Secret.  Bess Myerson alone might have been enough to make up for ABC's black-and-white coverage. 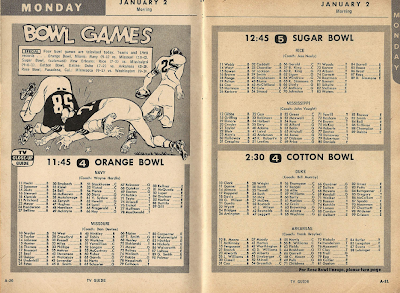 At this point in time, there were only four football games on January 1 (or January 2, in this case), and most of them overlapped: the Orange Bowl at 11:45, the Sugar Bowl an hour later, the Cotton Bowl at 2:30, and the Rose Bowl, the granddaddy of them all, at 3:45.  There were no night games, which is a big difference compared to today.  But the biggest difference, which football fans will notice immediately, is in who plays in these games. 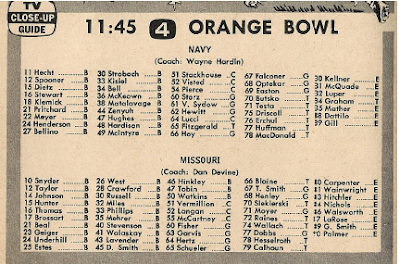 The Orange Bowl, of course, was the first of the bowl games to go prime-time, two or three years after this game was played.  It's been a long time since either Missouri and Navy were New Year's day contenders, but there's a good reason for Navy to be there: Joe Bellino, the Heisman Trophy winner, is their star running back.  A future Heisman winner, Roger Staubach, will be quarterbacking them the next three years. 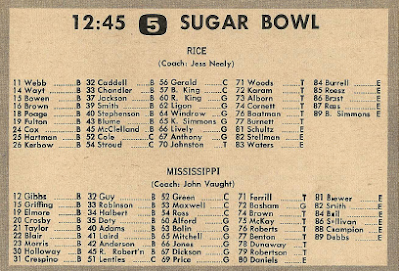 For many years the Sugar Bowl labored under a self-imposed handicap: New Orleans, one of the most racially segregated cities in the country, was somewhat less than inviting to integrated teams.  Hence, the majority of Sugar Bowl participants came from the South, and for that reason, the Sugar had a tendency to pick more unlikely teams than the other bowls.  And for today's football fan, they wouldn't be much more unlikely than Rice Institue.  A habitual bottom feeder today, Rice was at one time a pretty good team, as their 1960 record of 7-3 would indicate.  They would lose this game 14-6, however. 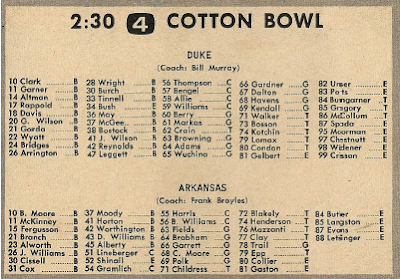 In fact, perhaps the only team unlikelier than Rice is Duke.  Duke! Yes, the team that year-in, year-out has one of the worst records in college football, was a powerhouse in the 30s, 40s and 50s. Even in 1960, they were 7-2. And they'd come out on top here as well, beating the Razorbacks 7-6. 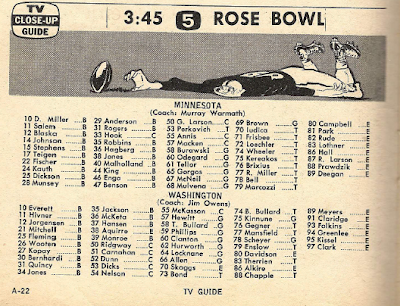 Well, maybe there's one other team even more unlikely than Rice and Duke, and that would be the Minnesota Gophers.  If you're my age or younger, you likely weren't alive the last time the Gophers played in the Rose Bowl.  As a matter of fact, every team in the Big 10 - including Nebraska, which isn't even an official member yet - has been to the Rose Bowl since the last time the Gophers were there.  And while it may be hard to believe today, the Minnesota Gophers were the National Champions in 1960, even though they will lose this Rose Bowl to Washington.  Reason?  In those days, the bowls were purely exhibition games - the national champion was chosen at the end of the regular season.  Incidentelly, Minnesota would return to the Rose Bowl the next season, becoming the first Big 10 team to make back-to-back appearances in Pasadena.  This time they would win, defeating UCLA.  They haven't been back since.

One of the advantages to having the hometown TV Guide is the chance to see a charming ad like this, as a local brewery wishes the native sons well.  Kind of poignant, in a way.  Ah, but then, isn't that part of what nostalgia is all about? ◙
Email ThisBlogThis!Share to TwitterShare to FacebookShare to Pinterest
Labels: Sports, Television