by Mitchell Hadley
Yes, it's a special Friday edition of Classic Sports Thursday, to celebrate the Yule season. (After all, if the NFL can have special "Sunday Gameday" editions on Saturday, we can do whatever we want, right?) 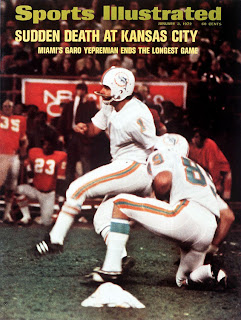 This is a quick link to this story at SI.com by Don Banks, clearly a man after my own heart, as he remembers back to Christmas Day 1971, and the longest football game ever played (not counting a playoff game from the USFL, but who's counting?) between the Miami Dolphins and the Kansas City Chiefs.
Like Banks, I would sit at the dinner table with one eye on the food and one eye on the field when big dinners and big games happened to collide. (When I was really spoiled, I'd be allowed to eat in the living room, in front of the TV, while everyone else was in the dining room.) Unlike Banks, I was not rooting for the Dolphins that day - never did, really. At the same time, I don't recall that I was rooting for the Chiefs, either. I do remember, though, the drama that accompanied that double-overtime thriller, and how it pretty much ended the NFL's playing football on Christmas for many years. They do now, but it's only one game, at night, when the movie theaters have opened and restaurants are serving and people are looking to wind down anyway. I think a lot of dinners were ruined that day, waiting for men to come in from a game that seemed it would never end.  What a Christmas!

As Banks mentions, the NFL Network is doing a one-hour retrospective on that game on, appropriately enough, Christmas.  Don't interrupt your dinner for it, but set the DVR.  It should be a lot of fun. ◙
Email ThisBlogThis!Share to TwitterShare to FacebookShare to Pinterest
Labels: Christmas, Sports, Television