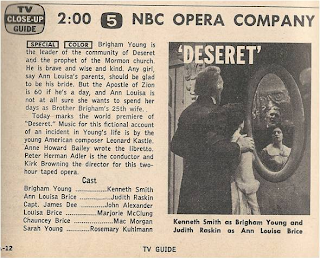 OK, so this isn't strictly speaking an opera post. Nonetheless, it does have a connection to opera. Therefore, it's good enough for me. And since I'm the editor, that's really all that matters, anyway.

Actually, it reads more like one of Paul Harvey's "The Rest of the Story" pieces.  It concerns the composer Leonard Kastle, who died last year.  As seen on the left, Kastle was the composer of the opera Deseret, about which we wrote a couple of years ago.  The producer of that telecast, Warren Steibel, was better known as the producer of William F. Buckley's Firing Line.  (The fact that Buckley was a conservative and Steibel a liberal is a great story in and of itself).

When Steibel was given $150,000 by a friend in order to make a movie, he turned to his friend Kastle for ideas.  Together, they came up with The Honeymoon Killers, based on the story of Raymond Fernandez and Martha Beck, known as the Lonely Hearts Killers.  So far, so good.  Kastle wrote the scrpit.  The director that Steibel hired, a a newcomer named Martin Scorsese (!  Yes, that Marty Scorsese), didn't work out so well - Steibel accused him of taking an entire afternoon to film a beer can, and fired him. Eventually, unlikely as it may seem, Kastle ended up directing the picture, his only work as a movie director.  Even more unlikely, the movie wound up a cult classic.

Kastle remains best known as a composer and director of musical productions.  The Honeymoon Killers, however, remains his best-known work.  And you can't tell its story without tying in William F. Buckley Jr. and Martin Scorsese.  And now you know the rest of the story.   ◙
Email ThisBlogThis!Share to TwitterShare to FacebookShare to Pinterest
Labels: Movies, Opera Wednesday/Thursday, Television