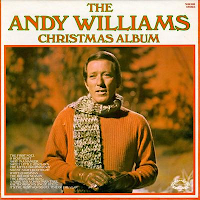 Reprinted from today's It's About TV.

I always liked Andy Williams, and in fact there was something very likable about him. He was handsome, with an attractive family and a smooth, easy style.  He didn't seem to take himself overly seriously, and he did seem to be enjoying himself on stage.  He stood behind his ex-wife when she was accused of murdering her lover, and there was something quite noble about that.  Yes, memories of watching Andy on TV are warm, pleasant ones.

But I wonder if he doesn't become even more likeable in retrospect, and I don't mean that in a critical way.  You see, there are entertainers who are timeless becuase they always seem relevant.  But others, like Andy Williams, are timeless because they epitomize their time.

What does that mean?  Well, I'm not sure.  Even as I try to figure it out I struggle to explain it in words.  But Sinatra, for example, is always Sinatra; and whenever you watch him (at least until his last, trying years), you feel like it's happening right now.  Inside that concert hall it could be 1958 or 1988; it doesn't really matter.  Time is what Frank says it is.  And that's why Frank's always cool.

But when you watch a DVD of an Andy Williams Christmas special, time doesn't stand still; instead, you’re transported back in time. Perhaps, as in my case, it’s to childhood; for others, it might be the days of your first job, your first love, your first Christmas together. Watching Andy sing with his brothers, you might find yourself remembering trips back home for the holidays; when he walks down the streets of an imaginary downtown, it might be the town where you grew up.; when the whole family sits around the fireplace singing carols, it could be your family on a cold winter’s eve.  The feeling you get watching one of these shows is more than just pleasure; it's a sense of warmth, of security, of simple pleasure.

And just as you smile when Frank Sinatra sings "You make me feel so young" because Frank's always young when he sings that, no matter how old he is, you smile when you watch Andy Williams because he makes you feel so young.  Frank comes into your life; Andy brings you into his.  We can (and often do) idealize the past, but when Andy sings "The Most Wonderful Time of the Year" (a song written for one of his shows, by the way), you remember what it was like when people actually went downtown to do their shopping, when cities actually used the word "Christmas" without fear, when Peace on Earth wasn't a cynical dream.  But don't take my word for it; those shows were special to everyone.

And that's why Andy Williams' Christmas shows are even better now than they were then; perhaps back then we took everything for granted, assumed that things would continue to be the way they'd always been.  Back then we didn't need Andy Williams to tell us how things were, because we were there.  Today, we need him because we'll never get back there again. And so when we read today of his death of cancer, at age 84, we mourned his death, but in a way he'll never be dead; he'll always be frozen in that time machine, keeping it ready for us every Christmas.

But if this is too existential for you, then let's just enjoy Andy doing what he does best: singing, and making us feel just a little bit better for it.