Why I'm uneasy about the (short-term) future of the Church 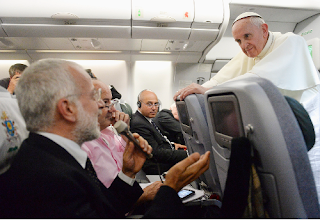 It's been a while since we've taken any time here to discuss the Pope. It's mostly a futile exercise, since nobody really cares what I think, and in any event my opinions aren't likely to change anything.*

*Until I publish my forthcoming papal novel, that is, which isn't likely to change anything either but which I'd hope might make me a lot of money and a movie deal.

Nonetheless, since I am the blog editor, I do have something of an obligation to you, the reader, to share my opinions from time to time, and this seems as good a time as any.

I make no secret that I'm troubled by the trends of the current pontificate, thought I fall into neither the trap of the traditionalists ("The sky is falling!") nor the liberals ("Everything is new again!"). That is to say there is a happy medium between the two; however, it also is to say that I probably fall on the pessimistic side of that medium, which makes me not-very-happy.

Feelings alone aren't enough to justify that unease, though; if they were, then we'd all be worshiping Oprah Winfrey. And so when I find an article that clearly articulates why I have this discomfort, I like to highlight it and pass it on. Such comes from the blog of English priest Fr. Ray Blake, who has also voiced his apprehensions on this papacy from time to time. This is, I think, one of the best articulations of a concern I share, one that continues to spread like a dark inkspot on a white shirt:

One thing that does worry me about the the present Papacy is that on the one hand the Bishop of Rome is calling for transparency, especially with regard to the IOR [Institute for Religious Works], the Vatican Bank, and yet on the other hand seems to act as if he is unconstrained by Law or custom, just like a Renaissance Prince.

Setting as a priority the clearing out of any hint of waywardness in the IOR is certainly important and it is good place to start, It is important the Church can be trusted, especially with money but transparency has to be attached to everything in the Church not just its finances.

I admit I was quite shaken by Francis' disregard for liturgical Law and washing the feet of women despite what the rubrics plainly say. The recent negation of the Franciscan Friars of the Immaculate's right under the rules set out by Summorum Pontificum, which gave every Latin Rite priest the ability to choose which form of the Roman Rite he wished to use, seems not only worrying but also high handed and most probably illegal, that is worrying too. Even the decision to Canonise the Blessed John XXIII without the necessary divine sign of a further miracle, and today it is reported that the Pontiff is seriously considering the Canonisation of Pius XII. These things might be good or possibly necessary or pastorally fitting or whatever you might describe them as but what is worrying is that they cut across the proper and due process of Law. There is a very serious danger of the Church being seen as a Renaissance Principality, Papa vult is not the basis of the Church's law. If the Pope wishes for transparency he cannot act like a Renaissance Prince, he too has to be subject to the Law, bending his personal desire to it, not bending the Law to his desire.

If the Church's Law is disregarded then the Church simply becomes an institution based on it earthly leader's whim. The most important role of the Pontiff or any ruler is to ensure the law is as clear as possible and immediately obvious to everyone. The Church must be 'a just society' because God is Just. If the Pope acts without due regard to the Law why can't anyone, the answer is obvious, if we do not obey the Law we become not a just society but a band of robbers. Bringing in confusion, muddying the waters, does no good whatever and in the long term destroys the Church's credibility, especially in a time when, as His Holiness tells us some pretty dramatic reforms are likely to take place.


Perhaps Francis does not feel he is a "Renaissance" pope because he doesn't style himself pope at all, preferring instead the title Bishop of Rome. We can call ourselves anything we want, of course, but that doesn't necessarily make it so, any more than tying a cape around my neck and calling myself Superman means I'm going to be able to fly once I leap off the garage roof. It can, however, tell us a great deal about the one using the words, and the words he uses. And, as Rush Limbaugh says, words mean things.

The words that this Pope uses may indeed give us a picture of the man. Were he a mere politician, I would probably accuse him of half-asseninery. Because of his office, though, he deserves more respect than that, and will get it from me. I would merely add that the sooner we realize the power of the written and spoken word, the sooner we stop trying to play a Catholic version of linguistic Twister and take these words at face value, the sooner we deal with the implications of these words, as Fr. Blake has done - the better off we'll all be. ◙
Email ThisBlogThis!Share to TwitterShare to FacebookShare to Pinterest
Labels: Catholic Church, Pope Francis, Religion