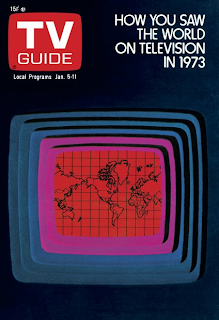 In general, issues from the 70s aren't my favorites; this might be strange considering I subscribed to TV Guide throughout the 70s and therefore should have more of them than I do for any other decade. In addition, I was alive and watching television for the entire decade, which means in theory I could have seen any or all of the episodes in any of these issues.

But in truth, as I've mentioned before, the 70s issues leave me unimpressed.  The typeset is minimal and unappealing; the ads are cluttered and lack the simplistic charm of earlier editions, the programs themselves have moved on from the days of live drama and experimental programming.  In short, TV Guide - like television itself - is older, more mature, more polished - and, as is so often the case, less interesting.

There's another, more personal, reason for my dislike of the decade, however, and that's because I spent so much of it in the worst place on earth, where life with only one television station (NBC) meant I was constantly being taunted and mocked with listings for programs I would never see, shows that in the pre-cable, pre-VCR days remained mere rumors to those living out in the hinterlands.  It may be true that small-town life has its advantages, but watching television in those days was definitely not one of them, especially for someone who'd already begun to mainline programming like a milder version of Mike Teavee.

The 70s aren't without their charms, though.  Some of the things in these issues attain mythic status precisely because they were unavailable to me, while others display a genuine quality and feel that seem (to me, at least) unique to that era.  Let's see if we can find some examples, shall we?  ◙

Read the rest here.
Email ThisBlogThis!Share to TwitterShare to FacebookShare to Pinterest
Labels: 1970s, Television, This Week in TV Guide