Should voting be compulsory? How much dumber do you want things to get? 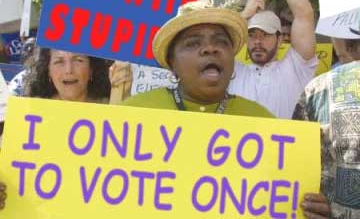 Sometimes you can't help but get sucked into reading something stupid, and I fell into that vortex this morning by seeing a headline at CNN.com* that said "Should Voting Be Compulsory?"  Being CNN, I naturally assumed the answer would be "Yes," because I assumed that the answer would be stupid.

*I know it's CNN, but I do occasionally check the headlines to find out if someone important has died, if a major city has been bombed, or if Jennifer Lawrence has had another nude photo hacked.

*Excepting, of course, the physical act of voting, including being able to find the hidden door into the polling place.  There's being well-informed, and then there's having to go through an obstacle course to get in and cast your ballot.  Nobody in their right mind would argue that - except, perhaps, the people who locked all the doors.

First, and speaking practically, the measures taken to make voting easier often accomplish nothing more than making voter fraud easier.  Of course requiring a proper ID can make the lines move slower - is that really such a bad thing compared to ensuring a legal vote?  And don't give me that line about it being harder for some people to get an ID in the first place - if you're motivated enough to vote, you're going to find a way to get one.  I'm sure there are dozens of political candidates who'd be only too willing to give you a ride to City Hall to get one.  Same goes for same-day registration - if I can't take pains to fill out the proper form 30 days in advance, or 90 days, or however long it may happen to be, that's too bad.  Anyway, if I've only lived somewhere for a few days, why should I be voting on local issues on which I've had no chance to educate myself?  And as for early voting - well, I'd be all for it if we passed a concurrent law that stated no candidate could campaign or advertise once the first person had cast an early vote.  That might be an idea worth looking into.

In point of fact, there are some people who are simply too dumb to be voting.  I don't mean that they're ideologically stupid, not at all.  True, there are some on both sides of the aisle, but ideology is something you're entitled to be stupid about.  No, I'm talking about people who wind up in videos by Jimmy Kimmel - people who don't know who the Vice President is, or don't know when they're being spoofed on current events, people like that.  Tell me truly - do you really want to live in a nation governed by leaders chosen by fools like that?

If we make voting too easy, with no effort, then it means we'll have a lot more voters like that.  It means that the vote of someone who's taken time to get involved and learn about the issues counts for just as much as someone who thinks Babe Ruth was the sixteenth president of the United States.  Now, I'm not an elitist; I don't think the world would be better run by scientists or intellectuals or people who are just better than the hoi polloi.  But I don't think any of us would feel comfortable driving around in our cars if they'd just been serviced by a gynecologist who couldn't tell a dipstick from a carburetor.

It is, of course, endemic of a society that doesn't really want to have to work hard for anything.  From the millennials and their strong sense of entitlement to a culture that doesn't seem to put much of a premium on actually achieving things, we've gotten used to having things made so easy that we don't even have to get up from the couch to do them.  From shopping to conversing with friends to watching videos, there's not much we can't do with a minimum of effort.  Why should voting be any different, I suppose?

And whatever happened to the great right of people to refuse to vote on principal?  I know you can always write-in a name, but if the only two choices on the ballot are Tweedle-Dee and Tweedle-Dum*, then I'd just as soon stay home.  You can't really force me to choose between the two, and many write-in votes are just more examples of frivolity.

*Or Ollie Dee and Stanley Dum, if you will.

Do I wish more people voted?  Yes, in the abstract.  Do I wish more people educated themselves on the issues (and not by the MSM) before they voted?  Most certainly.  But making voting easier just for the sake of raising the vote count, without any guarantee that the voters are taking themselves seriously, is an idea that itself doesn't deserve to be taken seriously.  The last time I heard someone discuss making voting mandatory, it was a contestant in a beauty pageant trying to answer one of those painful questions from the host.  It wasn't a pretty sight.  Neither is the idea of lines and lines of uneducated people waiting to determine who the next leader of the free world is.  That is as stupid as, well, getting your news from CNN.
Email ThisBlogThis!Share to TwitterShare to FacebookShare to Pinterest
Labels: Politics