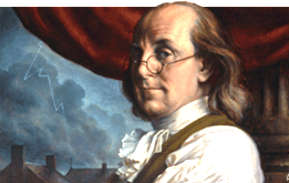 If you've read any of my blogs for any length of time at all, you'll know that I'm constantly - well, surprised is not the word; maybe illuminated - to see how true it is that there's nothing new under the sun. H.W. Brands' brilliant biography of Benjamin Franklin, The First American contains a very interesting quote, a passage (on page 218 of the hardvoer version) I find quite - illuminating:


Few of their children in the country learn English; they import many books from Germany. . . . The signs in our streets have inscripitons in both languages, and in some places only German. They begin of late to make all their bonds and other legal writings in their own language, which (though I think it ought not to be) are allowed good in our courts, where the German business so increases that there is continual need of interpreters; and I suppose in a few years they will also be necessary in the Assembly, to tell one half of our legislators what the other half says.

Now, you have to admit this is very interesting. I'm sure some will read Franklin's words and see comfort that our current immigration situation will amount to nothing. "After all," they might say, "we've always been worried about newcomers to America - even in Franklin's day. And everything's turned out all right." And I suppose there's something to that. The study of immigration in American is a fascinating one, as we see how different groups assimilated into American culture, gaining power, influence and acceptance.

But when I read this paragraph I see something else; the recognition that there actually was a distinctive American culture, even though at the time (early 1750s) America was a mere British colony. And that the Founding Fathers had, even before the founding of the country, an appreciation of that culture and a concern that it should be preserved. (And we shouldn't be surprised that Franklin would pick up on that, for in the debate about American independence he argued that "We're a new nationality . . . we require a new nation.")

With a few minor substitutions, Franklin's words could be spoken today by anyone with a mind to do so, and they'd be just as accurate. Yes, it's true we've faced this problem before - even predating American independence. But throughout the history of the country we've placed a premium on preserving that culture - enhancing it with contributions from other cultures, to be sure, but with a parallel process of assimilation. I know all the stories about German and Polish and Italian families where the native tongue was the only one spoken in the household, and where the sons and daughters became the first to learn the new language - but the point is, they learned it. There was an agreed-upon belief that it was a good thing for them to speak English, that it was essential to their chance to succeed in the "land of opportunity." I'm not sure I see a common belief in that today.

The Founders believed in a unified language, a common culture. They might be Virginians or Pennsylvanians or New Englanders, but they were also Americans. And there was something specific about being an American. Franklin was famous for saying that if we didn't hang together, we'd all hang separately. I wonder what he would think today; would he see a nation that, despite its political differences, was held together by common threads - shared language, culture, memories? Or would the vision be that of the Balkanization of America, a country being divided along cultural and ethnic lines, people with little in common and even less desire to have anything in common? We aren't hanging together anymore, it seems; but we certainly do know how to hang separately. If he could see us today, I don't think he'd be pleased.

For all his world travel, being an American was precious to Ben Franklin - even before there was an America.

More precious, apparently, than it is to many of today's leaders.