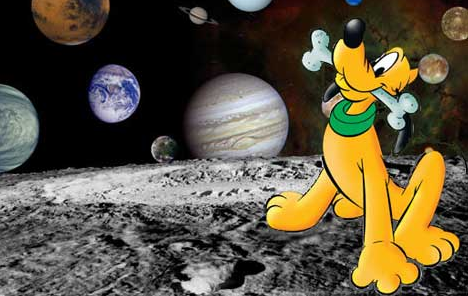 I hope you've been following the tremendously exciting Pluto story this week, but in case you haven't you can read about it here.  I've been absolutely enthralled by it; the idea of seeing actual pictures of that most distant planet* is just unthinkable.  As someone who's always been fascinated by space travel, I can't remember the last time I found something this exciting.  The first few flights of the space shuttle, perhaps?  Even though that was nowhere near as momentous as the race for the moon, it was still pretty interesting.  And yet this Pluto thing has been - to use a word I generally try to avoid - mind-blowing.

Pluto has existed as a planet for my entire lifetime.  I remember reading a book about it when I was in grade school; one of those Scholastic publications, I suspect.  I found the story of Pluto's discovery to be strangely gripping, and I can still remember the names of the scientists who made up the story: Percival Lowell, who thought there were canals on Mars and had pioneered the search for what he referred to as "Planet X," and Clyde Tombaugh, the man who finally discovered the planet.

Part of what made Pluto so interesting for a kid, of course, was the connection to Disney's dog*; it made the planet somehow more accessible to a child's mind.  But there was also something about the sheer distance from Earth to Pluto.  It was so much farther away than the other planets; it had a tilted orbit, and was so elongated that for a time it becomes the eighth planet, creeping closer to the Sun than Neptune.  The fact that it had been discovered in the 20th Century, long after an eight-planet solar system had been established, only added to its mystique.  The event not only changed history books, it changed music as well: Holst's The Planets ended with Neptune, and it was up to the contemporary composer Colin Matthews to compose a new movement for Pluto in 2000.

*In the same way, perhaps, that I liked the baseball player Yogi Berra because of Yogi Bear.

As critical of Neil deGrasse Tyson as I've been in the past, I think his book on Pluto is wonderful, and his description of Pluto as "America's favorite planet" is both perceptive and endearing.  The decision to change Pluto's status to that of a dwarf planet may be technically correct, but at the same time it points out why science fact is so much more boring than science fiction: it completely lacks any sense of romance, of mystery.  It seems likely that the fact Pluto was discovered by an American had something to do with it's downgrading.

But what does it prove, other than that Holst's work can be performed as originally written?  Not a thing to my mind.  Pluto remains, for me, a planet - period.  The sent back by the New Horizons spacecraft - taking more than nine years, and traveling over 3 billion miles - have made the tiny planet so immediate, so real.  Looking back at it - from that paperback book I read nearly 50 years ago to the tiny specks of light visible in the night sky - it is still amazing that something so far away and so dead can become so alive.  What Lowell and Tombaugh would have thought had they seen those pictures!  Dwarf planet, my foot!

This week Pluto came full circle, from one astronomer's distant dream to another's discovery of a speck on a photoplate to a planet that has become every bit as real as our own moon - more real, in its way, than most of the other planets in the outer group.  No wonder that, next to Earth itself, it remains my favorite planet as well.
Email ThisBlogThis!Share to TwitterShare to FacebookShare to Pinterest
Labels: Pluto, Space Program