The students who suffer from SBS 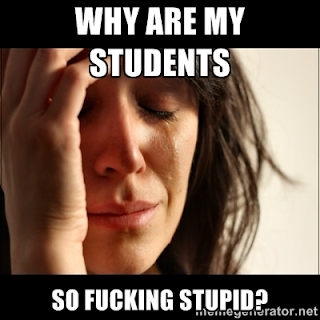 Pardon the language in the graphic at right; I apologize if you're offended, but there seems to be no better way to describe the escapades of those wacky college kids nowadays. Rod Dreher and others - I mention him because I first heard it used by him - call them SJW, Social Justice Warriors.  You know, they way they're shutting down free speech on campuses, along with substantial help from their instructors. SJW.  That's good, but I think they suffer from SBS - Spoiled Brat Syndrome.  (There's also the fact that the last two letters make up BS, which is what I think their rhetoric is. So bonus points for that.)

This isn't the first time we've seen it, of course; in more recent times, the 60s gave us an epidemic of know-it-alls on campus.  This could be the last time, though, at least in the way we think of it. If they're successful in their goals of eliminating any and all opposition, the only revolutions we'll be seeing (if we're allowed to view them at all) will be of the internecine type; the revolution consuming its own. If you think SBSers are paranoid now, just imagine what they'll be like when they start being persecuted by their own kind for not being ideologically pure. Now that's paranoia\ - just ask Robespierre how that went. And since it's Veterans Day today, I'll just add that many men and women over the centuries have died to preserve freedom of speech. They are heroes. Those who try to destroy that freedom should be called by what they are; totalitarian monsters.

I'll have more to say on this tomorrow in our Throwback Thursday feature, but the idea that these people will eventually get what's coming to them is cold comfort for those of us who will get it from them first. I've been around them myself, not on campus but in the workplace, and in a way the thought that they're well-meaning people at heart makes them even more despicable, because they're either dupes, fools, or those who, like our French friend above, believe the ends justify the means. At least those in the third category believe in something; the rest of them don't believe in anything: they just feel.

And so I'll close for today with this quote from Lileks, which I thought was a terrific commentary on what these people are really like, down deep, and what it would be like to have a world full of them:

These people will produce nothing. They will create no great art, write no symphonies, conjure no novels that speak across the decades, sculpt nothing of beauty. The world outside the bubble is irredeemable. It cannot, of course, be remade all at once, but tomorrow's a new day. Rome wasn't wrecked in a day.


Amen, brother. And that is just the beginning.
Email ThisBlogThis!Share to TwitterShare to FacebookShare to Pinterest
Labels: Freedom, Higher Education Scam, Oppression