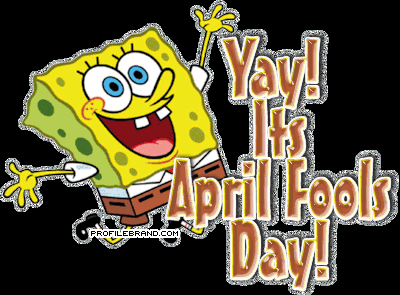 April Fools Day has never been a favorite day of mine. I don't have much time for April Fools jokes myself, and the attempts that one runs across online are seldom very funny. Most of them are either too labored or not labored enough, stupid or just lame, with the result that at least a third of the people who read them are sucked in and have to have it all explained to them. (Just ask Google.) They really are monuments to people who aren't as clever as they think they are.

That's not to say I don't enjoy a good joke or bit of satire; I think those of you who read "This Just In" when it appears on this blog will understand that. I was looking for one that might be good to offer as a "Flashback Friday," but the best of them have been rerun recently, so I don't think I'll dip into that well just now. One of the very best bits of April Foolery I've read today was this one from the F1 blogger par excellence Joe Saward, who offered this outrageous one on the new sport of bus racing. It made for a terrific way to start the day. (UPDATE: This one from the University of Oregon isn't bad either.)

One of the problems with good satire, which is what a lot of these April Fools jokes try to be*, is that the world itself has become so ridiculous and absurd that what passed for satire even a few years ago has become plausible enough that it loses its sting, and winds up looking no different than the hour's headlines on CNN. Then, in order to get your laugh, you have to explain to your readers that they shouldn't panic, it's all just a joke, and at that point you might as well throw your hands up and walk away.

*For example, when I was a kid (and maybe it's still the same way today), the quintessential April Fools joke had to do with a green and yellow bug, or something like that, crawling up your back. I suppose the equivalent in today's digital world is be telling people that opening this post has given them a virus that will wipe out their entire hard drive, but nowadays you'd probably get shot before your readers got to the punch line.

Jokes of any kind also run the risk of being labeled politically incorrect, which nowadays is a crime worse than murder, equal to treason, and falls just short of child molestation. It is tragic that humor, which is, according to the good Bishop Sheen, a divine attribute, has fallen victim to this purging of anything that deviates from the new norm, the norm that has been declared for us by our new thought police. I don't know where this is going to end; if the people simply roll over and accept it with docility, that would be the effective end of America as the Founders knew it, If, on the other hand, it is met with the same verbal and physical violence with which it is being administered, which seems increasingly likely, that could bring us civil unrest the likes of which we haven't seen since 1968 - or 1861, if you want to take it to its logical conclusion. The people responsible for this atmosphere are surely April Fools.

One of the truly disturbing aspects of today's world is that there does not seem to be any support coming from those we usually turn to. Literally all of our institutions have failed us: politicians, of course, are useless - they're the ones responsible for most of this in the first place. The one man running who ostensibly isn't a politician, Donald Trump, is thought by many to be a cure worse than the disease, although in truthfulness it's hard to see how he could be any worse than what we already have. Our courts and jurists are a joke, finding rights that were never thought of before while ignoring the Constitution meant to keep things together. Religious leaders are no better: the Church is being run by a man who seems bent on destroying eternal truths. Our law enforcement officials seem more comfortable establishing a police state than anything else, and often cause more fear in law-abiding citizens than they do criminals. Our schools have completely capitulated, either giving in to the PC fascists or promulgating their beliefs in the first place.* Bankers, investors, businessmen - all of them are seen as caring more about lining their own pockets than doing anything for those less fortunate, who are just a speed bump on the way to wealth. The streets themselves are jungles in many of our large cities, and there seems to be no standard American culture anymore. Speaking of which, what passes for culture couldn't fill a petri dish, and merely panders to the lowest common denominator. What's not to be depressed about? Our institutions are run by April Fools.

*Leading to the new aphorism that no student's mind is safe as long as schools are in session.

No amount of April Fooling with paper over this fact, that America seems to be at a crossroads, with the choices being the frying pan or the fire. That's not to say, as I find myself telling people, that we should be living as nihilists; even in Communist countries, people often found a way to live without attracting the attention of the authorities, and if it was a life that is unlike what we've become accustomed to, it did nonetheless allow for a certain degree of security and satisfaction. We've seen the persecution of Christians throughout Christianity, and yet Christianity persists. For those Christians remaining firm in their beliefs, Christianity will remain until there are no Christians left*, in which case there likely will be no world left either. The world may be run by Fools, but Paul reminds us that we can be fools as well, fools for Christ. Every generation has imagined the world would end, for one reason or another, during their lifetimes, and while this era has new and disturbing qualities which others lacked, we've managed to hang on so far.

*Although the truth of Christianity exists whether there's anyone to acknowledge it or not.

We too are fools, in April or any other month, if we don't acknowledge how bad things are. We shouldn't let it get to us, though; capitulation is the worst thing we could do. If America is no longer worth fighting for, no longer worth saving, it remains the case that many of the people living in it are worth saving, and that's what we have to do, however we can. It starts with your family, your friends, your neighbors, your co-workers, the people in your church. Some call it the Benedict Option, others have different words for it. It exists, however, and it's up to us to make sure it comes to fruition.

I started out talking about how April Fools Day isn't my cup of tea, and neither are the biggest fools of all, who try to fool us all with the world they're creating. Ultimately the joke will be on them, but until then, no matter what we've done before, hang firm. I won't channel my inner Dan Rather and urge "courage" for everyone, but I will offer this piece of advise: you know who the Fools are - don't let them fool you again.