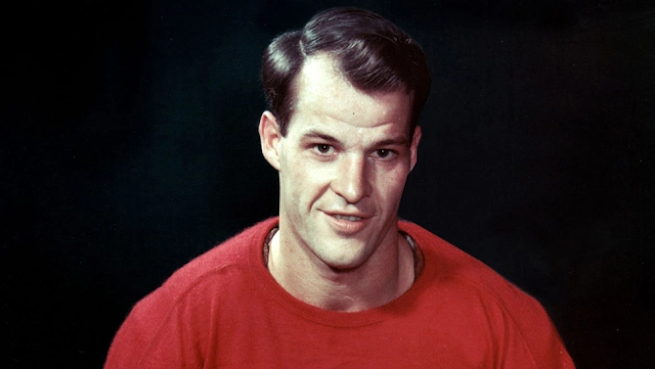 Mr. Hockey. Has there ever been a greater nickname in sports than that? I mean, The Great One is not bad, and there was The Bambino, and Wilt the Stilt, and Johnny U. Mention those nicknames, and immediately any sports fan will know who you're talking about. But those names all referred to the individual, as a diminution of the name or an emphasis on a particular trait or a play on words.

Mr. Hockey was different, in that the name was outward-looking rather than inward. It concentrated not on the individual but on the sport itself, and how it could be summed up in that one person. And for seven decades, nobody summed up hockey quite like Gordie Howe.

As CNN said today, Gordie Howe was "an iconic name that a casual and non-hockey fan would know," and for a sport that has always had niche status in the United States (except for cities that had hockey teams, and even there it was often a niche sport), that's saying something.

You don't get a name like "Mr. Hockey" for nothing, and Howe came by that name honestly. When he retired the first time, after 25 seasons playing what has always been a young man's sport, he was the all-time leader in goals, assists, points, and games played, and he'd already been venerated several times over. He was elected to the Hockey Hall of Fame, and then came out of retirement to play with his two sons in the World Hockey Association, where he played for seven more seasons, finally retiring for good at the age of 52.*

*Although he did play one game for the minor league Detroit Vipers in 1997, when he was 69. 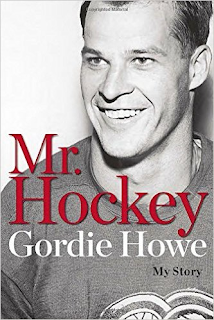 If statistics told the whole story, then he might well have been known simply as the greatest hockey player of all time, but his impact went beyond that. Just as Arnold Palmer had a drink named after him, Howe was honored with what was known as the "Gordie Howe hat trick," in which during the course of a game a player scored a goal, was credited with an assist, and received a penalty for fighting. Unlike many great goal scorers, Howe was not a lightweight, and didn't need a teammate to serve as his protector - his fists and elbows provided their own protection. A player once described his fists landing on an opponent as like chopping wood.

So he was a talented player, no question. If you only looked at what he did on the ice, you might have understood why he was held in such high regard. His greatness didn't end when he stepped off the ice, though. He was a gentleman to the fans, always pausing to sign autographs (a thousand an hour*), never thinking that the game owed him something, but hat it was he who owed the game everything. His dry wit was legendary; today the Detroit Free Press recalls how he used to tell French Canadian audiences that he was bilingual: "English and profanity." He lived most of his life in Michigan; with his wife Colleen, who was also his "agent, promoter and business partner," the Howes were indeed the First Family of hockey, which lasted until Colleen's death. You continually hear the words "modest," "unassuming," "a regular guy," when people talk about him. Children idolized him, and they retained that sense of awe and wonder when they became adults. He was a part of the city, a part of the fabric of Detroit.

*Another tribute: someone quipped that Gordie Howe autographs weren't that valuable, because he signed so many of them. You can't say that of very many athletes.

Some have mentioned how Howe helped retard the formation of the players union in the 1950s, reluctant to become involved because of his fear of offending Jack Adams, the Red Wings owner, with whom Howe was said to have something of a father-son relationship. Had Howe signed on to the union, it would almost certainly have had instant credibility. As it was, by the time the union did take root, many years later, the result was that salaries of hockey players were substantially lower than those in other sports, and Howe was by some estimates the lowest-paid superstar ever in sports. As the Free Press mentioned, the fact that he was not the most hated player in hockey because of his refusal to get involved is quite a testimony in and of itself. 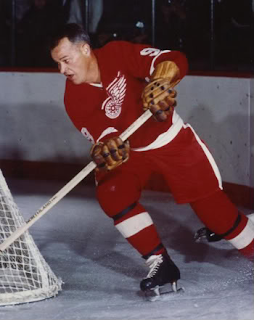 Many years ago, there was a foolish poll in The Hockey News that had Gordie Howe as the third-greatest hockey player of all time, behind only Wayne Gretzky ("The Great One") and the legendary Bobby Orr. Both Gretzky and Orr voiced their opinions that Howe should have been number one, and while you might think, "what else could they say?" there's no evidence they had to stretch the truth to describe the way they felt. Both Gretzky and Orr revolutionized the sport, no question about it. But
Gordie Howe was a man who transcended it; Gretzky chose number 99 in tribute to Howe's 9. The Free Press relates how in Quebec City, "owners of a bar called GH 9 assumed the name required no explanation." His image and statistics appeared in a memorable episode of The Simpsons. They, too, knew people would recognize the name.* When his number was retired by the Red Wings in 1972, Vice President Spiro Agnew was in attendance.

*According to the always-reliable Wikipedia, the producers first tried to use Johnny Unitas' image, but were unable to get them for free. I don't know this for a fact, but it's easy to imagine Howe asking himself if having his face appear in The Simpsons would help or hurt hockey, then concluding that the publicity could only help the game.

Although I've been a hockey fan most of my life, one of my great regrets is that I never got to see Howe play in person; the one time I had tickets to see the Red Wings play the hometown Minnesota North Stars, Howe was injured and did not play. I saw him countless times on TV, of course, even though the bulk of his career had taken place before I was born. No matter; by the time I started reading about the sport, Howe was already "Mr. Hockey." 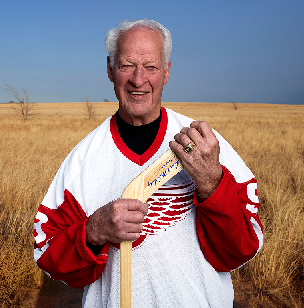 In 2014 Howe, already suffering from dementia, had a massive stroke, and the end appeared near, but he began to rally after a controversial stem-cell treatment. The point is not to analyze whether or not the treatment did what was advertised - it's that one immediately had the thought that if anyone could defy the odds, it was him.

Today, time caught up, and Mr. Hockey passed away at the age of 88, with his family surrounding him. When John Wayne died, a newspaper headline in Japan read, "Mr. America is Dead," and everyone knew who they were referring to. Today, the headlines read "Mr. Hockey is Dead," and everyone knows who they're referring to. His legacy, however, will live on until there's nothing and nowhere left to live.

UPDATE: The Ringer's Katie Baker has this wonderful retrospective on why Gordie Howe was bigger than life, even during his lifetime.
Email ThisBlogThis!Share to TwitterShare to FacebookShare to Pinterest
Labels: Gordie Howe, Obituaries, Sports