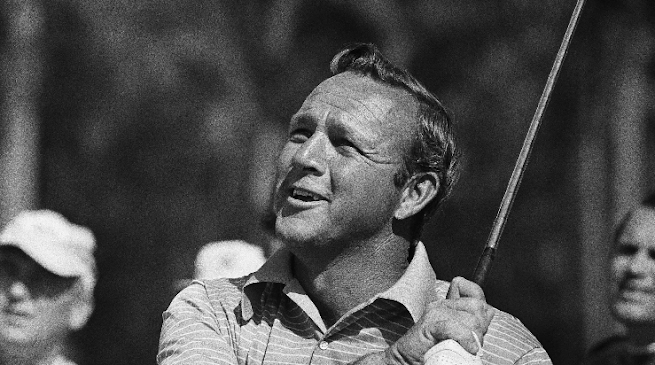 The cameras loved him, standing on the tee with that determined look, tossing aside a butt and hitching up his pants and looking down the fairway, then lashing at the ball with a swing that every golfer could identify with. When he sank the last putt on 18 to win a tournament, with that familiar knock-kneed stance of his, he would fling his visor in the air in triumph, a gesture which Tiger Woods would suggest after winning his first Masters. Before televised tournaments became commonplace, he starred with Jack Nicklaus and Gary Player in Big Three Golf, bringing the sport out of the country clubs and to the masses, becoming the People's Champion. With his combination of charisma, talent and genuine likability, just at the moment television was coming of age, he was the right man at the right moment. Arnold Palmer was very good to television, and television was very good to him.

The cameras loved him equally when he was off the course, on the cover of Sports Illustrated and on the cover of Time, trading quips with Bob Hope or running through airports with O.J. Simpson or doing commercials on ESPN. In 2014 Forbes ranked him third on their list of the highest-paid athletes, even though he hadn't swung a club in anger for a decade. He made $42 million that year,* and I doubt it would have been that much if he didn't come across as such a warm personality on television. No matter where Palmer was when the cameras caught him, he appeared to be at home, probably because no matter how the cameras caught Arnold Palmer, they caught him being himself - a great competitor, a nice man.

*Palmer made $875 million in his lifetime; only $3.6 million came from prize money.

The stories are legion, and probably not worth repeating here, since they're so well-known. Suffice it to say Arnold Palmer may have been one of the most beloved athletes of all time, if not the most beloved. He never left until he'd signed every autograph, and the sportswriter Dan Jenkins once joked that Palmer would use a telescopic sight to make sure there wasn't someone out there still wanting an autograph. His friend and competitor Chi Chi Rodriguez said every golfer should be grateful for the impact Palmer had made on the sport. “When Arnie wins a tournament," Chi Chi said,  I make an extra $100,000.” He was responsible for the British Open becoming an international championship; after Palmer went over there and won, other Americans followed. Women wanted to be with him, men wanted to be like him, a drink was named after him. No matter where Palmer went on the course, his legions of fans - Arnie's Army - would follow. Even God seemed to be on his side - he lost a tournament at Pebble Beach one year because he had twice hit a greenside tree with approach shots; that night, a storm felled the tree. Hey, I report - you decide.

Golf has become such a staple of television nowadays that it's hard to imagine a weekend without a tournament on TV somewhere; there's even a channel dedicated to golf - which Arnold Palmer helped create, naturally. Without Arnold Palmer there wouldn't have been a Jack Nicklaus, a Johnny Miller, a Phil Mickelson, a Tiger Woods. Oh, they would still have played the game, and they would have played it well - but would anyone have been watching? Suffice it to say that no man has ever had an impact on the game, and the culture that surrounds it, than Arnold Palmer. And when he died on Sunday at the age of 87, it was a life well-lived.

Yes, there's no question that Arnold Palmer was a television star. Though there may be better players, longer hitters, bigger winners, there's only one Arnold Palmer, and we'll never see his likes again.


This post also appeared at It's About TV.
Email ThisBlogThis!Share to TwitterShare to FacebookShare to Pinterest
Labels: Obituaries, Sports