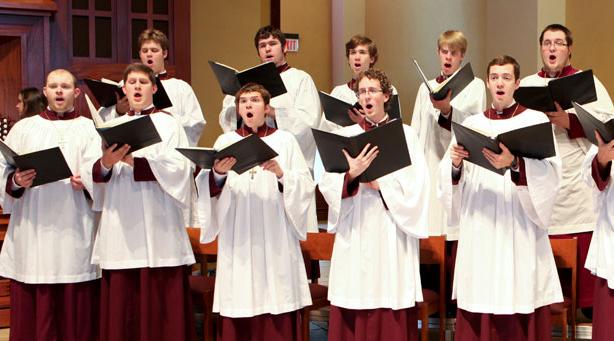 Churches are posting signs about their choral Christmas shows, as expected.  Some churches are having their annual "Singing Christmas Tree" with an aerial artist flying above the sanctuary and house bands playing rock music.  Other churches are doing full theatrical shows, while many others are having full rock concerts, even replacing church Biblical preaching and teaching with their concerts.  But most churches, sadly, as I drive the hills and dales of our state, have regressed into singing whatever comes out of Warner Music or Universal Music karaoke kits.  It seems the sound Christmas songs we have known as singers are being whisked away because they are not trendy, and do not fit within the postmodern church ideals.  For adults, it may be as simple as a Universal "Christmas music" kit that boasts of being sung in one practice with karaoke accompaniment of the latest album from their mega-star artist.

For children, it may be simply making moves and lip-synching songs that are provided from the two aforementioned secular giants.  Whatever happened to simply having a 25 kid strong choir singing sacred music with the church musician and then doing handbells?  Have we regressed to the point that, as Albert Mohler said over a decade ago, the young boys are not singing in church while young girls are dancing to whatever is the Top 40 hit as church music?  Sometimes, you wonder if a new generation, not knowing of the past, have decided to try again thinking most will not remember the past, and their tolerance is only for whatever comes out of the annals of the entertainment giants, without any knowledge of the masters of sacred music, especially with their government school music courses teaching only Top 40 pop hits because they are "politically correct" as the true masterpieces have religious overtones, which offend the usual suspects of the elites.  And if you only use seasonal references to temperature, then are you offending those who drive Commodores, other Supercars, and play footy?

Think about it.  Whether it is church music regressing as leaders continue to sell out their programmes to the big entertainment giants, or leaders choosing to make dancing to pop music more relevant and take young singers out, leading to a generation that will not sing in church (in those Life Enhancement Centres with loud rock bands, there is no congregational singing, as it is one loud rock concert) or have dance troupes that do the worst of the worst, we have a serious problem.  Why are the denominations and leaders in these cathedrals following along with the fads of Big Entertainment?
Email ThisBlogThis!Share to TwitterShare to FacebookShare to Pinterest
Labels: Culture, Religious Music