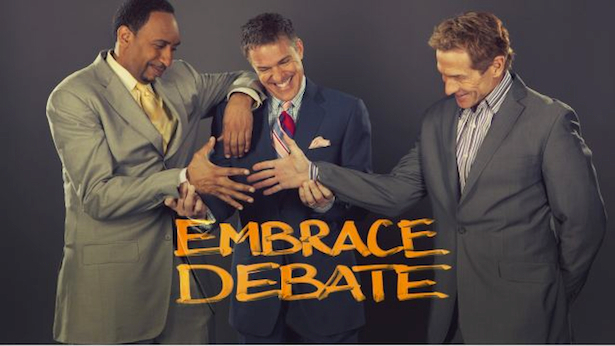 Rod Dreher wonders why we always feel compelled to pick sides, this time in Ukraine:

Do you know who the good guys and the bad guys are in Ukraine? I do not. In Egypt, I was not sorry to see the Morsi government overthrown, but one should not be under any illusions that the Egyptian military are the good guys. Why do we have to pick a side? Are we sure we know enough about what’s going on there to do so? Some of us might; one of this blog’s readers is in Kiev, and he has clear and firmly held opinions about the Yanukovych government. I respect that, but it is clearer to me that America does not need to be picking sides in this fight than it is which side we should pick.


Well, the first thought that came to my mind is that we choose sides because we live in a culture today that forces us to choose sides.  The mentality is everywhere.  We love our sports, and we apply its terminology to everything.  Politics becomes a horserace, and it matters less whether a candidate can articulate an issue than it does that he’s scored points, he’s landed the knockout punch, he’s pulling away from the field or falling back into the pack.  Nobody wants to know about the substance of what’s discussed – they just want to know who wins and who loses.

ESPN’s motto on many of its shows is “embrace debate.”  Doesn’t matter what the issue is, there have to be two sides, and they have to be heard out – often at the top of their lungs.  Even if you don’t have a strong feeling one way or another, you take a side, because that’s what makes good television – and good entertainment.

Reality programming dominates television.  And what is it about reality shows that most often appeals to the viewers?  You have a winner and a loser.  And the viewer must take sides; no sane individual would watch a show like Survivor without developing a rooting interest for or against someone – for that’s the other side of the coin.  If you can’t find someone you like, someone to root for, find someone you hate, and root against them.  It’s just as much fun – try it.

Everything is personal.  You either agree with me, or else.  Whether it’s politics, religion, sports, restaurant cuisine: if you disagree with me, it invalidates not only your opinion on that issue, but on everything else as well.  See it on Facebook, read it on Twitter, it doesn’t matter if it’s your battle or not – the important thing is to choose a side, and make sure everyone else knows which side you’re on.  And if they’re on the other side, judge them for that.

Given all this, is it any wonder that we feel compelled to take sides?  Armed conflict is, for us, another form of entertainment.  War is a spectator sport, to be viewed on television in-between highlights of the Olympics and scenes from the most recent argument on Capitol Hill.  We take sides on those, why not on war as well?  It’s a zero-sum game; there has to be a winner and a loser, and Americans love a winner.

Remarkably, for a culture that seems reluctant to view morality in terms of black-and-white, we seem to have no qualms about doing just that when it comes to choosing sides.  It’s hard for us to believe that both sides in a conflict can be “the bad guys.”  The Egyptian rebels fighting to bring down Mubarak must be right; after all, isn’t Mubarak supposed to be a dictator?  So let’s support them, and the fact that there are some pretty bad dudes among them – well, we’ll look the other way on that.

We abhor a vacuum.  Even in a situation such as Vietnam, where antiwar sentiment was rampant, it’s not as if people refused to join sides.  Many of the antiwar activists were openly rooting for the Vietcong, and the conflict between pro- and antiwar sides became as much of a battle as the war itself.  Not choosing a side – there’s just something un-American about it.

We lead with our hearts, not our heads.  We’ve Oprahfied the way we look at foreign policy every bit as much as we have everything else in our world.  Who’s the scrappy underdog, which side has the most malnourished refugees, let’s cheer on the plucky rebels raging against the big bad machine.

You see how absurd this all is?  So when Rod asks this question – and I think it’s a very good one, a very telling one – why should we be surprised at what the answer is?  It is, after all, the world we created for ourselves. And after all - it's just entertainment, isn't it?