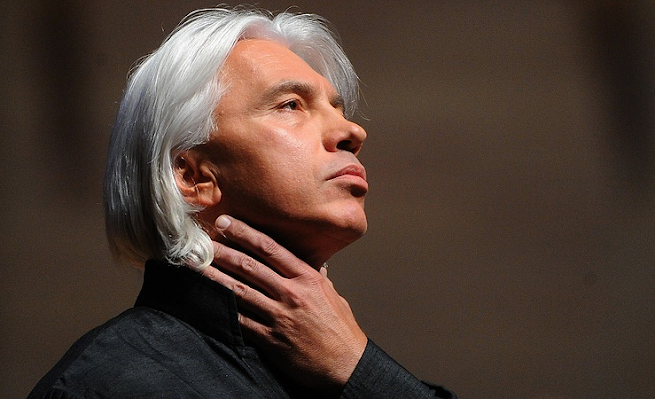 This just came in the wires this morning.  Baritone Dmitri Hvorostovsky (Дмитрий Хворостовски), the BBC Canwr y byd Caerdydd (Cardiff Singer of the World) winner of 1989, defeating Bryn Terfel (himself an accomplished baritone too) for the cup, died Wednesday of brain cancer at 55 after a battle of more than two years.

I've always wondered why we always have to watch bad pop music singing competitions every year when the biennial BBC Wales competition in Cardiff which he won is much better and the talent that wins always goes to higher levels, as we've seen.

The Красноя́рск (in Siberia) native thought in adolescence that the toughman society of vice would put him in prison and not on the stage, and his drinking and absurd behaviour took him up to his early 30's, and admitted his first marriage collapsed because of alcoholism.  Going sober, he married Swiss soprano Florence Illi, who survives him, and together they had two children.

The bel canto singer's notable roles include the titular role in "Eugene Onegin," where he performed, among others, with Renée Fleming in her first full production of a Russian-language opera, leads in Verdi's "Don Carlos," "La Triaviata," and "Il Trovatore."  He promoted Georgy Sviridov's music, which the Russian government refused to promote because he refused to join the Communist Party.

He will be missed.

"Eri tu" from Verdi's Un ballo in maschera, which was the song he sang to win Cardiff:


The Merry Widow (with his wife):