Carol For Another Christmas

Once upon a time the Christmas season didn't just automatically end on December 26 - it actually lasted all the way through New Year's Day. The time between Christmas and New Year's was a time for parties; for example, the Andre champagne commercial I linked to the other day always ran after Christmas. Ads for the New Year's parades and bowl games clearly were packaged as a part of the holiday season, complete with holly and berries. There are few things that get my goat at this time of the year more than seeing Christmas trees at curbside the day after Christmas.

This "Christmas after Christmas" extended to the TV programs we watched back then. A prime example is the made-for-TV movie Carol For Another Christmas, which was shown for the first and only time on this date in 1964. Read more about it here, in this excerpt from my TVParty! article entitled "The UN Goes to the Movies".

* * *
The first and probably best-known program in the series was Carol for Another Christmas, shown on December 28, 1964. Loosely based on the Charles Dickens’ classic, it boasted perhaps the strongest pedigree of all the episodes: written by Serling, directed by Academy Award winner Mankiewicz (his one and only foray into television), with music by Mancini, and featuring an all-star cast led by Sellers, making his first acting appearance since suffering a near-fatal heart attack. Sellers epitomized the contribution many made for the series, working for $350 rather than his customary $250,000 fee. 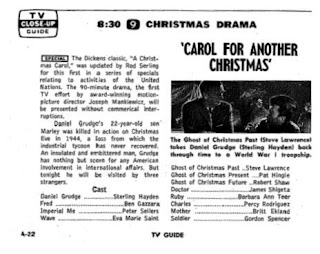 Serling’s modern-day version of A Christmas Carol tells the story of Daniel Grudge (Sterling Hayden), a wealthy industrialist still mourning the death of his son Marley (Peter Fonda, whose scenes were cut from the final version and appears only as a portrait hanging from the wall) on Christmas Eve, 1944. Grudge, embittered by Marley’s death, has become an isolationist, opposing American involvement in any international situation.

Into his unhappy life come three ghosts: Christmas Past, (Steve Lawrence), a World War I doughboy who shows Grudge the need for diplomacy by taking him on a trip to Hiroshima, showing him the ultimate horror of war; Christmas Present (Pat Hingle), an epicurean spirit demonstrating the selfishness of modern man by feasting on fine foods while starving war refugees stare from behind barbed wire; and Christmas Future (Robert Shaw), who takes him to a post-apocalyptic world peopled by a sect of survivors led by Sellers, playing an original character called Imperial Me.

Sellers’ character, the greatest departure from Dickens’ story, appears to be a ridiculous 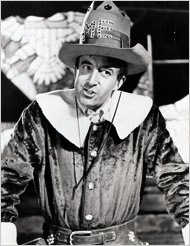 character, dressed in cowboy hat and pilgrim collar – but his message is anything but laughable. He parodies Grudge’s isolationism - “Each behind his own barricade! Follow me, my friends and loved ones, to the perfect society! The Civilization of ‘I’!” – with tragic results, as Grudge’s butler (Percy Rodrigues), trying to talk sense, is shot to death for his troubles.

Grudge returns to the present with a changed view, but it is not necessarily the glorious transformation of Dickens’ original. Grudge may concede the need for diplomacy and intervention, but it does not change the fact that the world is a brutal place.

The cast in “Carol,” which also included Ben Gazarra as Grudge’s nephew Fred, Eva Marie Saint as a Navy WAVE, and Britt Ekland (Sellers’ then-wife) as one of Imperial Me’s followers, was almost uniformly strong. In particular, the turn by Steve Lawrence, better known for his singing career with his wife Eydie Gormé, came in for critical praise, with Mankiewicz’s son Tom telling the New York Times years later that Lawrence’s portrayal was his father’s favorite. “He only knew Steve as a singer, but he really impressed him as an actor. He thought he was a natural.” Mancini’s score, particularly the theme (available on many Christmas collections) was also praised.

Despite this, however, the program itself received mostly negative reviews. Many critics saw the production for what it was – a noble but heavy-handed, preachy, moralizing effort. “Earnest” was the word that popped up often, stated or implied. It was an important project to the cast and crew, perhaps too important - C. O. (Doc) Erickson, production supervisor, remembered that “Joe and Rod were inspired to do it because they felt it was important to do the U.N.’s business and promote it.” According to Erickson, “I thought it was overdone. It was too long, too tiring and beat you over the head too much.”

This kind of heavy-handedness was not unique for Serling, who was given to lapsing into what Twilight Zone director Lamont Johnson referred to as “messianic moods.” This often happened when Serling felt strongly about his subject. “Serling has two poles in his writing,” said Marc Scott Zicree, author of The Twilight Zone Companion. “There’s his powerful, human-oriented writing, and his very didactic writing, and ‘Carol’ falls on the didactic side.”