by Mitchell Hadley
Bob Sheppard was the voice of God. Actually, he was the voice of Yankee Stadium, of the New York Yankees. (Which, some would say, is the same thing.)  He died Sunday at the age of 99 years, 8 months, and I think it's safe to say no stadium public address announcer was ever more beloved. 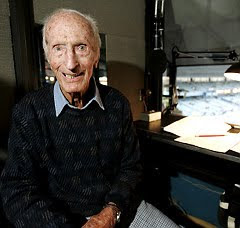 I never set foot in Yankee Stadium, never heard Sheppard's voice in person. And yet, even through the tinny sound of television speakers, I could feel what others felt, could tell that Bob Sheppard was more than a voice, he was The Voice - the the definitive article, one might say.  The AP obit mentioned how "[o]nce, while ordering a Scotch and soda at a bar, Sheppard watched as heads turned his way.  He often read at Mass, and was subsequently greeted by parishioners noting he sounded exactly like the announcer at Yankee Stadium.  'I am,'' he would reply."  Gravely, one imagines.

Speaking of definitive, although I consider myself pretty good when it comes to obits, I also know when to defer to a piece of writing that can't be topped. Hence, Tom Verducci's appreciation of Sheppard at SI.com Monday. A sample:


There was a game back in the 1980s at the stadium when the bullpen gate was left ajar after a pitching change had been made. The umpires were vainly trying to secure the attention of anybody in the bullpen to close the gate, which was actually part of the outfield wall in left-center field, so the game could resume. Sheppard caught on to what was happening.

Suddenly, in a rare in-game moment when he spoke into the public address microphone for anything other than a player introduction, Sheppard announced in that proper cadence of his, "Will someone . . . in the bullpen area . . . please close . . . the bullpen gate . . .Thank you."

It was closed immediately, lest the risk of a lightning bolt or two. Only Sheppard could turn such a prosaic moment into something approaching divine providence. I was in the press box that night and was struck by the commanding nature of his voice. The stadium actually came to a hush. His voice did, in that Charlton Heston, The Ten Commandments kind of cinematic way, really sound like the voice of God coming down from on high.

It doesn't get much better than that, does it?  Either the writing, or the announcing.  ◙
Email ThisBlogThis!Share to TwitterShare to FacebookShare to Pinterest
Labels: Obituaries, Sports