by Mitchell Hadley
The one thing, the only thing really, that surprised me about the Lebron James affair was that anyone was surprised at all.

Not that Lebron (or LBJ, as ESPN tells us we must refer to him) signed with Miami in the end. It’s all right to be surprised about that. At the beginning I hadn’t even seen Miami on the radar screen; like so many casual fans* I figured he’d be headed for New York. And, in the face of all that, it would have been equally OK to be surprised had he decided to stay in Cleveland. 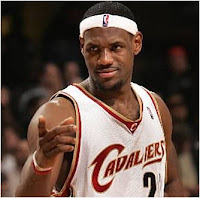 *Bringing a new level to casual fan: I probably haven’t watched a dozen basketball games in the last dozen years. I actually look for excuses to turn down free tickets to Timberwolves games. Perhaps that makes me more of a non-fan than a casual one. Or at least a discerning one.

No, what people had no right to be surprised about was how the decision was presented. It was crass, tasteless, insensitive. It also garnered tons of publicity, and a significant viewing audience on a television network that essentially pre-empted its entire evening schedule to cover – not a sporting event, not a competitive contest, but the announcement by the best player in the game as to where he was going to play the next year.

In short, it was America. It represented virtually everything good and bad about today’s culture, with the possible exception of sex. We are now a land of the reality show, of the infamous 15 minutes of fame having grown to the point where the word “celebrity” has been diluted beyond recognition. Everything is important, everyone is worthy of attention, every event is Breaking News. Tornado watch in Arkansas? Car chase in Los Angeles? Put it on – saturation coverage. I’m surprised we don’t have a cable channel devoted to traffic cameras catching drivers running red lights.*

*A million-dollar idea, probably. It’s yours.

Under these circumstances, what James did last week was not only understandable, it was logical, predictable. It may well have been the only thing he could have done. If this sounds like I’m making excuses for him, well, he doesn’t need me to do that. He’s taken a lot of heat (no pun intended) for that announcement, particularly from the owner of the Cavs (more on that in a minute). Sportswriters have condemned him, pundits have tisk-tisked, talking heads have debated him. But you know who’s remained silent about this?

That’s right. The demographic that eats up reality television. The people who watch The Bachelor, Survivor, The Apprentice and all the rest. They would have understood perfectly what happened last week. It would have been far more real to them than the reality that James’ critics, and perhaps you and I, are accustomed to. People propose on television, break up on television, get hired and fired, go through rehab, admit their innermost secrets, stab others in the back - all in front of millions of viewers. What's the big deal about announcing that you're jumping teams? In saying this I’m not suggesting that LBJ couldn’t have done it better, or more wisely; I’m only suggesting that it was perfectly in tune with what we as a nation and a culture have come to accept as a normal form of entertainment.

For make no mistake about it, that’s what the LeBron James carnival was all about. Entertainment. And it worked beyond anyone’s wildest expectations. Thanks to James, Chris Boch and Dwayne Wade, the NBA now has a team that anyone can hate. It has a rivalry (Heat-Cavs) that should make for terrific viewing on Christmas Day, where the league will undoubtedly place it for the benefit of ABC. It’s much the same as the heyday of the New York Yankess in the 40s and 50s, back when they were going to the World Series every year and people around the country would turn out to see them and root against them and hate them. If the Heat should win three or four championships over the next few years, so much the better. The quest will then be on to find the giant-killer, the people’s champion, the team that takes down the Heat. If the NBA hasn’t figured this out by now, they should have. It would generate the kind of revenue that would prevent the nasty lockout that now seems to be threatening the game in a year or two.

And speaking of the reaction of Dan Gilbert, the Cavs owner, I’m not so sure that was really on the up-and-up. Perhaps I’m too cynical, having been in politics for so long, but I have the feeling that Gilbert understands this business model much better than he’s letting on. It’s possible that his feelings really were hurt, but it’s also possible that he saw, in Lebron’s decision, not the white heat of fury – but instead the cold, hard reality of dollar signs.

Back in the 60s, when Bill Russell and Wilt Chamberlain were such great rivals (Russell often being portrayed as the good guy, the selfless team player and winner; Chamberlain the bad guy, more interested in improving his own stats than the team’s chance of winning), their every game became a small morality play. In the buildup to those games the Philadelphia owner, Eddie Gottlieb, would relentlessly attack Boston's Russell - his style of play, the supposed dirty tricks he'd get away with, anything and everything. Once, during practice before a game, Gottlieb approached Russell. "I assume," he said, "that you know this is all for show, just to sell tickets." Don't take it personally. Perhaps, as I say, I'm being too cynical in thinking Gilbert's taken a page from Gottlieb's playbook.  We'll know for sure if James is a guest at Gilbert's house for dinner after the Christmas Day game.

Of course, Gilbert might have gotten a little carried away with his act, which brought Jesse Jackson into the fray.  All that stuff about the black man and the plantation (even though, from what I could see, Gilbert never used those exact words, nor did he mention slavery).  But how do we know that Jackson wasn't in on it as well? David Stern called Jackson a "friend" of the NBA; maybe he's just here to sell credibility to the rivalry.  Jackson actually succeeded in winning back some sympathy for Lebron in some corners, while at the same time earning Gilbert spirited defenders of his own.  As they say in the PR business, it's all good.

At any rate, time will tell how this little drama plays out.  But one thing's for sure: what we're seeing is every bit as American as motherhood, the flag, and apple pie.  And nobody should be surprised by that. ◙
Email ThisBlogThis!Share to TwitterShare to FacebookShare to Pinterest
Labels: Culture, Sports