Of Upton Trio's Evocation and Mark Bavis: In Memoriam September 11, 2001

by Bobby Chang
As I mentioned in May when attending a dance concert, the Upton Trio, featuring South Carolina Philharmonic concertmaster Mary Lee Taylor Kinosian, had a thought-provoking piece, Evocation: In Memoriam September 11, 2001. A clip of the piece is available at the group's Web site. This 15-minute piece is not available as a digital download, so to acquire it will require you to physically buy the album.

The Bavis family still wants a lawsuit and wants all information known on what happened that killed the son, sibling, twin brother (remember Mark and twin brother Mike were Stingrays teammates), and uncle. 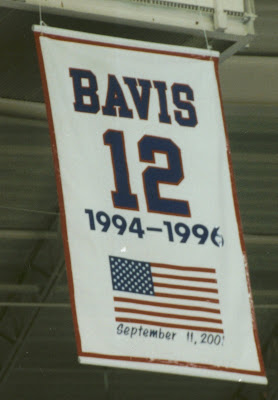 It does not do justice when you consider when Mark and Mike Bavis were teammates on a minor league ice hockey team, I had the opportunity to see both Bavis brothers on the ice. The ECHL of the early Stingrays years was not the league of today's developmental league. The careers of both Bavis (who later became an NHL scout at the time of his death) and current team president Rob Concannon, were intertwined together. I still remember attending games where the ECHL first acknowledged Bavis' death, and the next night, when the Stingrays officially lifted the #12 to the rafters.

Let us remember that we were attacked by nineteen homicide bombers of Usama bin Laden's Al Qaeda terrorist network. This is not a day, as the President wants, to celebrate the virtues of Communism and "service" to the Left's causes, as he promoted last year. This is a day we mourn for those who died. This is a day that reminds me to remember that the wanted poster of Usama that George W. Bush painted days later is still up, and the prize is there for the offing.

We remember, nine years ago, September 11, 2001. It was the day America changed. And we remember the victims who died that day, and the troops who died in the battles since to stop terrorism of all types in the Middle East. ◙
Email ThisBlogThis!Share to TwitterShare to FacebookShare to Pinterest
Labels: 9/11