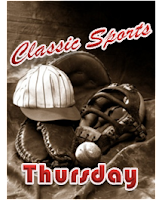 Most of us who have read the blog will know that I was an 8th grader at Prep when a certain Randhawa girl was in 12th grade, and we know very well who she is today.

But today on Classic Sports Thursday, how many people know that George Herbert Walker Bush, in 1947, played on the Yale baseball team in the first two NCAA DivisioN I baseball tournaments, and the Bulldogs lost each time in the final, first to California at Berkley, and Southern California in the second year (and it was the first of twelve). Jackie Jensen, a future American League Most Valuable Player, was on the first Bears team.

The tournament was actually held on the campus at Western Michigan University's Hyames Field. After those two years, they moved to Lawrence-Dumont Stadium in 1949, in 1950 it moved to its home for now its 63rd year, Omaha, with the first 61 seasons (1950-2010) at Johnny Rosenblatt Stadium before its move to Toronto Dominion Ameritrade Park last year in downtown.

It's time for what has become one of the most exciting events in all baseball -- a championship that has been held annually since 1947 -- the only major professional level of baseball has been continuous that long save maybe a rookie league or two. (The current NPB title series has been played since 1950, and continuous; MLB sine 1995 thanks to labour, and most minor leagues since 2002, as most leagues' championship series were cancelled in 2001 as a result of the terrorist attacks.)


(Sorry, folks, had to say that . . . but when the ring says South Carolina, and you've enjoyed so much in Omaha after having been dry for centuries . . . ) ◙
Email ThisBlogThis!Share to TwitterShare to FacebookShare to Pinterest
Labels: Baseball, Classic Sports Thursday