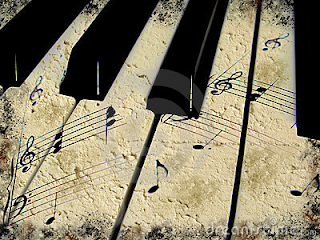 I was reading a list in church regarding the youth music traditional Honours and All-State choruses in churches, and the All-State orchestra. Considering I had a cup of coffee (as they say in sports) through youth education in parochial school, and had a piano class in college to comply with art mandates, and did not take private voice lessons until I was 26, and sang in his first "true" choral gig at 31 (discarding my church choir because of its abusive tactics against musicians by advancing karaoke, which I referenced church musicians were treated as Powerade bottles), I consider how it would have been if I had started music lessons at a younger age.

What unfortunately caught my attention was a newer All-State group, the "All-State Praise Team," which in postmodern doublespeak is code for "garage rock band spoken here," where the church is turned into a club where rock music plays. We go from the Hill, Kinosian, Nakahara, Nagel, Curry, Hein, and other distinguished musicianship of trained musicians, the LaRoche, Gunnels, Harrison, Hungerford, Will, Stallard, Cuttino, Fox, Briggs, and other trained vocalists that sing timeless sacred song that is sound in both doctrine and theology, to the garage bands wailing the latest from the Michael Jackson library (those who are new here should understand that this references the 2011 acquisition of leading modern worship church publisher EMI by a consortium of the Michael Jackson Family Trust, their music publishing partner Sony ("Sony ATV"), Blackstone, and Mubadala -- yes, the hat sponsor on the Scuderia Ferrari (#&%^%#! team), often lacking any sound theology (some notable heresy houses have their own music publishing houses in-house, as Australia's notorious prosperity gospel house has one, and many churches use their material, which was even performed on a popular television programme in the States). At this note, Haugen and Haas would be perfectly acceptable in the church, which is something that my Catholic friends object (and yes, the problem is notorious even in Protestant circles; Haugen and Haas is found in the 2008 Baptist Hymnal, which is dominated by material from the Michael Jackson Library, most of which became part of such after the 2011 acquisitions).

Why have we dumbed down our standards where morbidly unhealthy rock music (morbidly unhealthy both in body, as we learned about one musician at a church recently, and in teachings they offer) is regarded as better than a musician whose is a full 140.6 Ironman race finisher? The songs of the postbellum church are violently toxic with light material based on feelings, and not the serious, wholesome material we've learned including the setting of the Nicene Creed and songs from the Bible that have come from our choral training. In a modern church, if I walked into the room with my violin, piano, and vocal friends to practice serious music, we would be laughed off by the postmodern emotional types because of a hate, especially being taught today, of a certain group ("dead white males") that is a popular teaching in today's Common Core (which, if you've studied the issue, you will discover that it drops people's academic levels down two entire grades, or worse).

It seems when an All-State Praise Team is much easier to find when an appreciation of Biblical Doctrine and Theology are sacrificed in favour of the beat and feelings, and the "look at me" type popular music vocalists and musicians have supplanted sound teammates who sing sound doctrine and theology in groups of 30-100 voices of music that matter. At this rate, will there be serious musicians left out cold when the garage band is praised, and trained church musicians are now mocked, when All-State garage bands are more popular than orchestras for youth?

We are teaching a bad lesson to this generation when the banal that requires no thought replaces material that requires serious reading of God's Word. ◙
Email ThisBlogThis!Share to TwitterShare to FacebookShare to Pinterest
Labels: Pop Culture, Religious Music