Is Pope Francis the Church's rock, or her millstone? 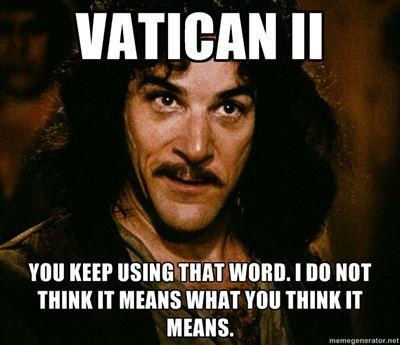 We were at Mass on Sunday, watching the Communion line come to its end, as mothers brought their small babies with them to the altar.  As is often the case, my wife turned to me and whispered about one particularly small one, "Look at that clueless face."

"Well," I replied, "I can't think of a better place for someone without a clue to be than in a Catholic Church."

That might sound like a harsh assessment, I know.  I'm tempted to think that it's OK for me to say it since I'm a practicing Catholic, but I'm not even sure I'd object if a non-Catholic mentioned it.

The Church is, to put it mildly, in a mess.  And a good deal of it has to do with the man in the white suit in the Vatican, or at least the guest house.

The Bishop of Rome, as he prefers to style himself, has been at it again, with more of his confusing statements that can leave the faithful every bit as clueless as that two-week old baby.  It's getting to the point where, even after reciting the Creed, I'm not quite sure what I believe in.  Or, rather, I'm uncertain as to what the Church believes in.

Sure, this is partially frustration talking*.  I don't think I've made it a secret that I'm not what you'd consider a fan of the current pope.  (Although if you're not sure, you can check here, here, and here for starters - oh, and let's throw this in as well.)  And if you've checked those links out (and if you haven't, go ahead - I'll wait), you'll be thinking, with some reason, that I'm not really saying anything new here.

*Though I'd like to at least be given credit for expressing said frustration with a humor and eloquence that's rare in the blogosphere.

The state of the Catholic Church today can be profoundly depressing, if you allow it to become so.  There are a lot of Catholics who are angry at a lot of people, especially including other Catholics.  It's true that Christ Himself said that He came to sow division, but even so it's hard to imagine a figure who's been more divisive than the current pope.  He's won worldwide acclaim, true, especially from non-Catholics, while at the same time turning many Catholics who once were friends into, if not bitter enemies, at least adversaries each questioning the other's good faith.  Every day he seems to say or do something that threatens to turn traditional Catholic thinking on its ear, and nobody can be quite sure whether he meant to do it, or that his words are being manipulated by the media.  In one of those articles I linked to above, I described the current pope as either "Machiavellian in his cleverness, Christ-like in his gentleness, or Ted Baxter-ish in his cluelessness."  I'm still not sure which it is, if in fact it's not all three.

There is, however, this growing feeling that you can't rely on the Church - at least the part of it here on earth, headed up by men - to instruct you in what it is you should know.  A case in point was that Mass I alluded to at the start of this article.  It was a perfectly orthodox Mass, done by the rubrics, but then there was this homily by the deacon.  To the extent that it was full of factual error, it can only be said that the man had to have been the product of a Catholic school education.  The topic was that day's twin canonizations of John XXIII and John Paul II.  The deacon started off by talking of how he had always liked John because John had been the pope to abolish Latin in the Mass, and that meant that the deacon, then a young altar boy, wouldn't have to deal with it.  John didn't do any such thing, of course - in point of fact, John composed a little piece called Veterum Sapientia, which among other things "stressed the importance of Latin" in the Church, including the Mass.  Latin never has been "abolished" in the Mass; the Vatican II document Sacrosanctum Concilium, which permitted use of the vernacular even while encouraging the importance of Latin in the Mass, wasn't even adopted until after John's death.

From there, the deacon went on to discuss John Paul II, for whom he also had a good deal of affection, although he mentioned that JPII had often been coupled with John XXIII; John had promulgated Vatican II, while John Paul had sought to end it.  Aside from the amusement this must have generated among traditionalist Catholics who accuse John Paul of everything from kissing the Koran to going soft on dissident Catholics, it's a disservice to a man who saw himself as being perhaps the first pope to truly implement Vatican II in the manner in which it had been intended.  Again, this is not to come down harshly on the deacon, for the perception he gave of John Paul was that which is found in the popular lexicon.  He didn't intend to maliciously slander the truth; I genuinely believe he didn't know better, because he'd never been taught otherwise.

I don't think it's an exaggeration to say that the last few generations of Catholics have been among the most ignorant when it comes to what the Church actually teaches.  In that sense we're our own worst enemies, for often those who oppose us do so because they understand our teachings better than we do; they fear them, or disagree with them, but at least they know what they are.  If only they were aware that the Church today is nothing but a giant pussycat, a soft touch for those seeking to "modernize" her teachings.

What does the Church teach?  It's not as if there aren't resources out there that lay things out in a pretty clear manner.  But to so many, including - increasingly - the current pope, they don't seem to matter so much.  As someone said, "if you don't stand for something, you'll fall for anything," and that's what we face today.

I said in one of those earlier pieces that I wasn't sure I'd convert to the Church today, not because I disbelieved what it taught but because it didn't teach anything to which the wise might repair.  Rather than having Peter the Rock as the foundation of the Church, we now have something (or someone) more akin to quicksand.  And yes, it can be discouraging.  But rather than despair or hopelessness, the prevalent emotion I have is anger - outrage and indignation that, to paraphrase Benjamin Franklin, such a precious gift - in this case the Deposit of Faith - can be treated with such disdain and carelessness.  Even if the pope plans no dogmatic changes, the confusion he creates in his wake serves more to undermine the Church's authority from within than most anything that could be done by one of her true enemies from without.

It's an effort for me to write about this pope without delving into acts of uncharity, which is why I don't do it very often (although perhaps more often than I should), and why I try to stay logical in my reasoning.  I have said before that I do not hate this pope, which is true, but I don't like him either.  I pray for him, but freely admit that I don't pray hard enough or often enough, so perhaps I should take my share of blame when he makes another of his forehead-slapping comments.

The Bishop of Rome has done many things in the year-plus since his election, but he's not shaken my faith in my faith, in the Church, in the papacy.  Just in the pope.  But there are many people out there who are as concerned as I am, and many who are worried and scared.  There are many uncertain in their faith, and many others who have no faith, and perhaps will not be introduced to it because of the lack of definition present in Rome's teachings.  Ross Douthat, the New York Times house Catholic, remains confident that the pope will not introduce any radical change, but understands the fear that many have, and acknowledges that if such a change is made, the result is likely a schism within the Church.  It will be then, if that time comes, that everyone will have to choose sides.  My intention is to remain with the Church - whichever side that happens to be. ◙
Email ThisBlogThis!Share to TwitterShare to FacebookShare to Pinterest
Labels: Catholic Church, Pope Francis, Religion