(Green Bay, WI)-- Minnesota Vikings quarterback Brett Favre revealed yesterday that his team's excruciating loss to the New Orleans Saints in last Sunday's NFL Championship game was actually part of an intricate plot hatched two years ago by a group of Green Bay Packers fans, led by none other than … Brett Favre.

"Yeah, I admit it. The whole thing was a fix, a scam, a huge prank on the Vikings and all their insufferable fans," says Favre. "Listen, I'm a Packer. I will always be a Packer. And what we just pulled off was perfect, we punk'd 'em right out of their jock straps." 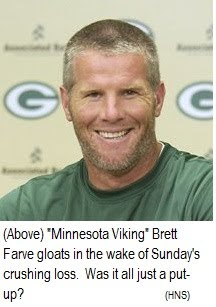 Speaking in the "Suds 'n Crud Bar" in Green Bay, Favre revealed that his plan to join the Vikings and almost lead them to a Super Bowl was cooked up after he left the Packers two seasons ago.

"The plan was that I'd go to the Jets, play okay but not great, then lure the Vikings into thinking I might come out of retirement again to play for them," he said, wearing his distinctive #4 Packer jersey one more time. "They fell for it, even paid me millions, and I came back without having to go through training camp and all that crap. My drinking buddies and I came up with quite a plan."

The "plan," says Favre, involved not just coming back to play for the Vikings, but almost going all the way to the Super Bowl.

"It would have been dull to just have a mediocre season," he explains. "Going 8-8 or 9-7 or even going to just the first round of the playoffs wasn't enough. I played out the string, bringing it all down to one play that would have put those Vikings in the big game. But look what I did. It looked pretty real, didn't it?"

What did happen was that on a crucial moment in the game's final seconds, Favre threw an interception that kept the Vikings from attempting the winning field goal.

"I'll look at the films of this for the next 20 years and laugh like hell," says Favre. "See for yourself. I could have easily run for four or five yards on that third down play, even on my tired old legs. Longwell would have had an easy field goal try. Instead, just like I planned, I ran to the my right and passed back across my body to the left. Every idiot high school coach knows that's a sure-fire interception waiting to happen. Worked like a charm."

The Saints did intercept the pass, and went on to win the game in overtime with a field goal of their own.

"You gotta love it," says Favre. "Remember - did I already say this? - I'm a Green Bay Packer. Lombardi, Starr, Hornung. I hate the Vikings, I have always hated the Vikings, I will always hate the Vikings. I thought this would be a perfect way to go out, not just retiring, but screwing up their chance for a Super Bowl. I had my doubts that we could pull this whole thing off, but damn if it didn't work."

When asked about returning for another season, the 40-year-old quarterback was noncomittal. "We'll see," he said. "I haven't made up my mind about retirement. There are a couple more teams that I really hate, so you never know."
Email ThisBlogThis!Share to TwitterShare to FacebookShare to Pinterest
Labels: Humor, Sports, This Just In