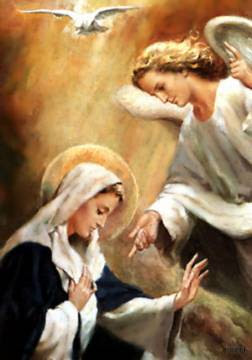 You remember the "Just Say No" campaign. Simple message - whenever you're confronted with something you shouldn't be doing, just say no.

Simple in concept maybe, but not so simple in practice.

We talk less about just saying "yes." And often when we do say yes, it's to the wrong things - the things we ought to be saying no to. And yet our salvation rests on the simple act of saying yes. It is the yes we say when Jesus asks us to give our lives to Him.

And it all started with the yes of Mary, and the simple faith behind her answer. She couldn't have known everything God had in store for her because of that answer, and the foreshadowing she did have, as in the case of the words of Simeon, often wasn't encouraging.

And yet her yes was firm and decisive, and we see no evidence that she ever wavered in the faith she had in her answer, and in her God.

We've lately focused our attention on the negative, on the bad things that are going on both here and throughout the world. And, I'm afraid, we'll probably continue to be confronted with them. But for a moment let's consider the positive - the positive answer of Mary.

Just say yes as Mary did, which we commemorate on this Feast of the Annunciation, March 25.