Thoughts as we mourn those lost to baby murder 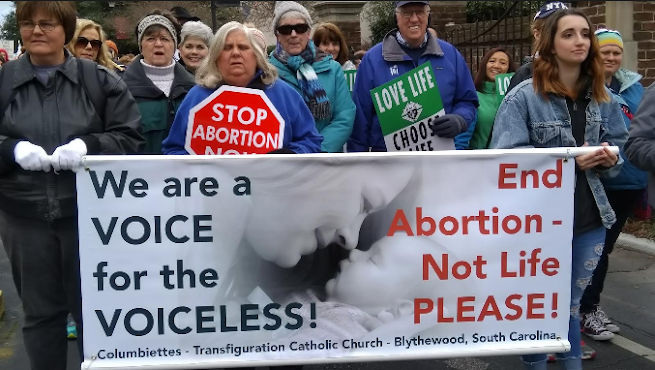 Over sixty million have died at the "convenience" called "abortion".  Yet elites forced down a Congress where all finances are lead by the same activists that want to force us to fund killing children.  It made me ponder the attendance in our own state at the Women's Marches when it seemed they outdrew our March for Life every year in all three years.  What gives?  (Of course, I have one of the most liberal legislators pushing for baby murder representing me.)  In fact, this year, our politicians were not at our rally as they were at a celebration that has cost me $10,000, my car, my college ring, my dignity, and even forcing me to wear symbols of the enemy, even signing my checks in enemy colours.

Hirono and The Bay Area Giant.  Our annual March for Life has the Knights of Columbus helping us lead the event, as I've noticed for all 22 years I've been associated with the movement.  But two Senators representing elite enclaves (Honolulu and San Francisco) decided to attack President Trump's nominees for judicial positions over being members of the Knights.  And yet there's also a "Personhood" legislator in our state that denounced the March for Life because the majority of marchers for being Catholic.  They know that they could not have won Roe, Doe, Windsor, Obergefell, Lawrence, or other major leftist victories without their judges.  They fear their arrogance is overturned by common sense of the people.

The New York City-State.  Sen. Dirksen's warning of the city-state holds true.  New York City is its own city-state (actually three states in the Senate) but they singlehandedly passed a law that makes baby murder legal through all nine months, decriminalises baby murder, and more.  Gov. Cuomo then lit up the Freedom Tower in pink to celebrate -- but why are we celebrating this?  I've seen this month every ugly celebration being done on every New York building with the celebration that cost me everything above.  The Founding Fathers would be angry at seeing one city dominance.  One NFL  player in anger responded, "It is a sad and evil day when the murder of our most innocent and vulnerable is celebrated with such overwhelming exuberance."

Covington.  The attacks on parochial school are sad but a byproduct of today's humanist education.  In some ways I wish my parents never pulled me out of The City based on stereotypes.  I learned the hard way parochial school was the best because everyone was respected based on the standards of God's Word, not as the old Don Koch and Mark Harris song said, "the newest rage is to reason it out" and "man is a god and God is no longer alive".  Those that attack the Catholic school students have no respect of those who are in parochial education.  Of course, considering Stephani Germanotta's attack on Vice-President Pence as she has worked to advance propaganda, what do you expect from those that attack Biblical worldviews?  Now we hear one of the parties that tried to attack the Catholics tried to crash a mass.

Having been the victim of too many aggressors who lied about me and wanted me dead in classic Saul Alinsky style, I sympathise with the students.  National Review has an article about the lying "MSM" attacking.

You Attack Them Because Many are Catholics?  Notorious Libertarian Party candidate Steve Lefemine, who has pushed for a Personhood Bill in our state legislature, has blatantly attacked the local March for Life because Catholics are involved, even though Protestants are just as involved in the rally as Catholics.  This is a petty shame because he has fallen to a trap reminiscent of the Northern Ireland-Republic of Ireland wars.

Please DO NOT Push Heresy!  A college "praise team" sang at our March for Life, and it was set to karaoke.  As the event ended and we walked back to our cars, that group of vocalists sang some doctrinal malpractice that was heavily offensive -- but sadly, too many churches have failed to see the discerning ear.  The man-centred worldview of the song in question from an Australian Pentecostal NAR-affiliated denomination is troubling.  Maybe I've gone over the top but when you've sung Händel's "Israel in Egypt" and find more in sacred classics of 300 years ago while seeing nothing from modern pop music, and you've paid musicians at recitals in a karaoke world, it is jarring.  But to sing a tunes of a denomination that refuses to answer Biblical truths and ministers that refuse to speak Biblical truth, as Hillsong leaders refuse to condemn sexual perversion or baby murder is a warning to all of us that Albert Mohler stated Beethoven's songs are not suitable for worship because of his pantheism.   Likewise, the affirmation and not calling sin what is sin by this denomination whose songs that college group sang is a serious disturbance.

by Bobby Chang
And when eight days were accomplished for the circumcising of the child, his name was called Jesus, which was so named of the angel before he was conceived in the womb.

-- Luke 2:21
Email ThisBlogThis!Share to TwitterShare to FacebookShare to Pinterest
No comments
Labels: Christmas