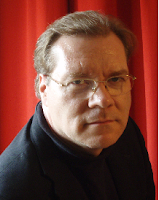 Mitchell Hadley has been the Managing Editor and “Cultural Archaeologist” for In Other Words since its inception in 2004. He also blogs exclusively about television at our sister site, It's About TV!

Mitchell has had a long and varied record of civic and political involvement, and from 1996 to 1998 he was the host and executive producer of the television political discussion series Richfield Republicans on TV.

As readers of In Other Words know, he has written extensively about politics, history, classical music and television. In addition to It's About TV!, he has authored several articles on classic television for the website TVParty.com and has been quoted in several articles on the relationship between television and American culture.  His novel The Collaborator was published in 2015, and a second novel, The Car, is scheduled for late 2017 or early 2018. He currently resides with his wife in Minneapolis, Minnesota.

Steve Harris normally writes sports-related nonsense and cultural observations when the mood strikes or when the Blog Editor (see above, a.k.a Perry White) booms out a "Harris, I need copy!" dictate.

Steve began his writing career in the late '50s when he tried to create a neighborhood-based newsletter on a kiddie printing press he got for Christmas. He went on to become Sports Editor of the Santa Clara (CA) High Times, Sports Editor of the West Valley Norseman, News Editor of the Bethel Clarion, and a free-lancer with published articles in the Star-Tribune, Leadership Journal, The Seminarian, Perspective Magazine, The Old Times, The Standard, Minnesota Sports, the Fillmore County Journal, and other periodicals. He helped on one book, is writing one of his own, and has wonderful ideas for yet others in collaboration with the aforementioned Mr. White.

A former pastor, teacher and school administrator, he currently works in the nonprofit world in grant writing and communications and is a B & B innkeeper in Lanesboro, Minnesota.

Bobby Chang is the principal contributing editor, often filling in during the Managing Editor's increasingly frequent absences from Our Word.  A native of Taipai, Bobby is a conservative political activist, chronicler of cultural foibles, music critic, and NASCAR aficionado par excellence

Bobby was graduated from the University of South Carolina (a/k/a The Other USC), and lives in Columbia, SC. Not only is he a frequent contributor to Our Word, Bobby was one of the first to follow the blog upon its inception in 2004.

Paul Drew, also known simply as "Drew", still isn't quite sure how he wound up with this distinguished group, but every once in a while he gets an order from the Bossman to write something, and he does his best to comply.

An increasingly disenchanted native of Minneapolis, Paul admires great literature and music, counts Wagner among his musical heroes (although he hates the man's guts), despises Regietheater, thinks higher education is a shell game aimed at indoctrinating young skulls full of mush while introducing them to a lifetime of debt  But after you get past all that, you'll find he's really quite a pleasant, albeit mysterious, fellow.
Email ThisBlogThis!Share to TwitterShare to FacebookShare to Pinterest