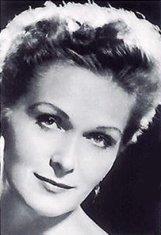 She was compared to Callas, although as Terry Teachout points out, there were critics who saw her as fussy and mannered (a judgement with which he concurs). As the picture on the left verifies, she was indeed "a great beauty," which reminds one of Jay Nordlinger's story about taking a friend to see Schwarzkopf perform. Upon seeing the singer on stage for the first time, the friend gasped, "You mean she sings, too?"

Elisabeth Schwarzkopf was one of those starts whom even non-operagoes had heard of. She came from a time when opera singers were popular stars on radio and television, when the LP had made possible the communication of opera to a much wider audience than the concert hall. As My Favorite Intermissions and others have put it, it seems another sign of the end of an era, the era in which classical music stars were really stars, part of pop culture. In the last two or three years we've seen the deaths of Franco Corelli, Renata Tebaldi, Victoria de los Angeles, Birgit Nilsson and Anna Moffo, among others. Sure, there's Domingo and Pavarotti, Sills, Sutherland and Peters (and Risë Stevens, for those of us who have long memories and saw Going My Way), and Fleming and Bocelli (!) are probably the best-known to those who don't watch PBS, but who will we be mourining fifty years from now?

Ah, but then there was that Nazi thing (her death, ironically, bookends a week which began with the Mel Gibson furor), and in this case it's hard to avoid the labeling since she actually was a card-carrying member of the Party. ("Everybody at the opera joined," Tim Page's obit quotes her as telling the New York Times. "We thought nothing of it. We just did it.") Perhaps if she had been more forthcoming with the revelation it wouldn't have created as much of a furor, but unfortunately Oprah wasn't as big back then. (She was probably the victim of bad PR as well; one wonders if she wouldn't have been more readily forgiven had it turned out she been a member of, say, the Communist Party...)

Add to that how styles had changed over the years, and those charges of fussiness were what took hold and stayed there. One could still admire some of her recordings from the past, but one doubts she'll be remembered with the same affection that, say, Nilsson or Lorraine Hunt-Lieberson were on their passings. But you dismiss her legacy at your own risk. She was most memorable in her interpretations of Mozart and Stauss, Wagner, Beethoven and Wolf, and Prima la musica has a nice appreciation of her career.

Doubtless Teachout is right when he says that her Nazi past hangs over her, and always will. Yet, as he points out, it is possible to appreciate the art without necessarily admiring the artist. We can condemn Wagner the man and still thrill to his music. (Or some of us, anyway.) There is always something of the artist in the art (or should be, at any rate), but the truly great artists always attempted creations that would live apart from them. It is up to us as the audience to judge how successful they are.

As An Unamplified Voice puts it, "She was neither the last, nor the greatest, but she was for a while the most praised. That is something." It is indeed, and as far as it goes perhaps that's enough.

UPDATE: As Ray reminds us in an email, Elisabeth Schwarzkopf's nephew is none other than General Norman Schwarzkopf, the brilliant leader of the Allied military forces in the first Gulf War. What might history be like if Schwarzkopf had been allowed to go into Baghdad right then and there? One can only wonder.
Email ThisBlogThis!Share to TwitterShare to FacebookShare to Pinterest
Labels: Classical Music, Morality, Obituaries, Opera