QUEENSLAND PARK, AUSTRAILA -- Police investigating the death of media naturalist Steve Irwin are reportedly searching for new suspects in the case just days after it was originally thought to be the work of a single stingray that allegedly stabbed Irwin in the heart with a poisonous barb.

“We’re finding it very hard to accept that a single ray, acting alone, was able to bring down this wily and experienced outdoorsman,” said Detective Inspector Keenan Wallabee, referring to growing speculation that what appeared at first to be an open-and-shut case might not be so straightforward after all. “I mean, this man hog-tied crocodiles before breakfast, for land sakes, and now we’re supposed to believe that some squishy little semi-fish that kids hand-feed in zoo ponds was able to do this by itself. I’m no conspiracy nut, mate, but who’s going to believe that?”

Suspicions first arose after the discovery of an amateur video tape that purports to show the gruesome incident. The tape, belonging to an elderly tourist, Mr. Abraham Zapruder Jr., who was filming at the beach where Irwin was snorkeling at the time of the attack, has not been made public. A government official who has seen it, speaking off the record, says it raises more questions than it answers.

“You can see the ray all right,” said the official, speaking on condition of anonymity, “but you can also see a shadowy dark object come in to the frame of the picture from this sandy knoll off to the right. It’s hard to make out, they’ll have to do more analysis, but there’s definitely something maybe there.”

CNN legal analyst Roger Cossack said such statements could prove damaging to any future prosecution of the suspect ray. “When you have police officials making these kinds of comments, casting doubt on their own evidence, what’s the public going to make of that?” Cossack said last night on Larry King Live. “If I’m on the defense team, I’m going to keep drilling it into the jury’s consciousness. The police aren't even sure of their own case. If that’s not reasonable doubt, I don’t know what is.”

Investigators, perhaps trying to downplay such speculation, are discounting rumors which have spread on the Internet since Irwin’s death, suggesting a link between the stingray and the similarly-named James Earl Ray, convicted assassin of Dr. Martin Luther King, Jr. Officials were quick to point out that Ray died in 1998 and that, while the average life of a stingray can be up to 30 years, such a connection was unlikely. 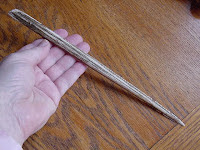 (Right) The so-called "Magic Stinger," which skeptics contend could not possibly by itself have caused Irwin's death.

The Zapruder tape, however, has fueled interest in what some are now calling the “Sandy Knoll” theory. Irwin’s television crew apparently captured the attack on tape as well, but Zapruder’s tape, made from a different angle, supposedly documents the chaotic moments after Irwin’s rendezvous with disaster, when his crew ceased filming to run to the stricken superstar’s aid.

Zapruder, now in negotiations with major cable outlets for the footage, agrees that something seems amiss. “It was strange the way Mr. Irwin acted after the stingray jumped at him. He kind of fell toward the ray when you think he’d be jumping back. It's almost as if there was some type of force or impact from behind propelling him forward. You can see for yourself just as soon as the lawyers get all the contracts signed.”

Local police, meanwhile, are still holding the lone stingray in custody while the investigation continues. The ray has made no public comment since its arrest, but has reportedly asked for legal assistance from a representative of the National Wildlife Fund or the Cousteau Society. Plans are to move the ray to a more secure location on Sunday morning.