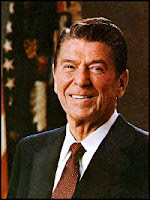 Lately I’ve been spending a lot of time on my video archival project (second in my nostalgic heart only to my vingate TV Guide collection), converting and editing thousands of hours of old video tape to DVD. Over the past few days, I’ve been working on the TV coverage of Ronald Reagan’s funeral, for no particular reason other than it was something to do, although it somehow seemed like the right thing at the time. And of course it was, for today is Ronald Reagan’s birthday.

It’s interesting, listening to the commentators during the funeral, at how surprised so many of them were at the huge outpouring of emotion after Reagan’s death. Brit Hume talked of wondering whether or not Reagan’s many years out of the public eye might have dimmed the memories of his countrymen, then wryly acknowledged, “How wrong I was!”

Watching the footage serves to remind us of how large, how great a figure Ronald Reagan was. He represented the first presidential vote I ever cast, and the best. Liberals and Europeans (if that’s not a redundancy) mocked him as a cowboy, a simpleton, a right-wing extremist, an almost cartoonish figure. But by the time of his death The Economist proclaimed him “The Man Who Won the Cold War.”

Reagan's enduring quality was that of optimism, of confidence in his nation and its people. Regardless of the circumstances, he remained sure that good would triumph in the end. It was a welcome message to a nation scarred by war, scandal and incompetence in its leaders. As Jimmy Carter prepared to leave office many wondered if the presidency was too big for one man - it turned out we only needed a man big enough for the office. Ronald Reagan was that man, larger-than-life, who rose to meet the moment and made it his own.

I was particularly struck, watching the hours of coverage, at the number of young people. Kids who weren't born when Reagan was president, or couldn't have remembered him. Younger ones, who didn't even know what they were seeing. All of them had come to pay their respects to the great man. And I thought: these kids aren't going to learn about Ronald Reagan from the history books - they're going to listen to their parents or grandparents talk about what they had seen or heard, how they remembered him. "Dad, what was Ronald Reagan really like?" Living history, not the things you read in textbooks.

In the years since he left office he's continued to grow in stature, partly because of the smallness of his successors, but also because time has reaffirmed the values he held, the values that made America great. There was a decency about him, an honesty in the sense that what you saw was what you got. That's not to say that everything was perfect, that there weren't problems along the way. (Iran-Contra, anyone?) It wasn't the Golden Age of Pericles, but then Pericles' age wasn't golden, either.

As the coverage came to an end, the presidential historian Richard Norton Smith reflected on the images of the day: the world leaders gathered in Washington to pay homage, the hundreds of thousands who had passed by the casket in California and in the Capitol, the crowds, five and six deep, who had lined the motorcade route, waving flags and applauding in tribute as the hearse passed by. As the sun set over the Reagan Library at the end of this long day, he summed it up with a quote from Sophocles, "One must wait until the evening to see how splendid the day has been." It was safe to say, he said simply, that "It is evening in America."

Perhaps the best way to remember Ronald Reagan is by one of his more famous quotes, from his first inaugural address in 1981:

"We have every right to dream heroic dreams. Those who say that we're in a time when there are no heroes, they just don't know where to look."

We know what to look for today; we just don't know where to look. But it would be contrary to the dreams he dared to dream, the nation whose values he affirmed, if we were to simply give up and assume that America was incapable of producing more heroes. It will be morning in America again someday soon; the faith Ronald Reagan had in America and her people was not a misplaced confidence or one whose time had passed. If we do not turn our backs on all that is America, her history and heritage, her values and ideals, then the greatness that was and still is America will lead us in the future. And that will be the fitting legacy of Ronald Reagan.