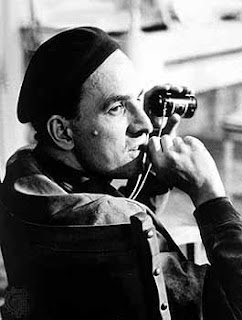 It seems somewhat pretentious to write an obit on someone as great as Ingmar Bergman, who died today at 89. Writing a piece like that is travelling on a slippery slope - you start discussing the man and his films, and the next thing you know you're offering deep, meaningful interpretations, discussing autobiographical and existential overtones, and sounding like every pompous college graduate you've ever known, dressed in a black turtleneck and tweed jacket and offering incredibly erudite opinions on film theory, all the while burying the knowledge that in reality your opinion is no better, no worse than anyone else's.

That he was great isn't something that really should be in dispute, although the word pretentious was often used with regard to his films as well. And they were often dark, challenging stories that operated on multiple layers, using symbolism and language to convey the innermost aspects of the human condition. (There, see how easy it is to slip into that mode?) Bergman was not to everyone's taste, but then neither is Jack Black.

So we're not going to attempt to explain Bergman here. Bergman himself did it about as well as anyone could, in a 1971 interview with Dick Cavett, in which he talks about his youth and gives candid appraisals of his films (and, at one point abruptly shifts gears and starts interviewing Cavett).

Rather, take this as an opportunity to go out and watch a Bergman film and find out what all the shouting was about. The Seventh Seal is a personal favorite, and you're likely to find it either incredibly brilliant or amazingly self-indulgent (or, perhaps, both). A warning, though: if you're contemplating suicide anytime soon, best to stay away from The Silence or Cries and Whispers; better, instead, to go with The Magic Flute or Smiles of a Summer Night, which showed that Bergman did have a lighter side. (Even he admitted many of his dark movies were too much for him to take.) Rent them on Netflix, or check Turner Classic Movies for the inevitable film tribute that should be coming shortly.

Love him or hate him, there's no doubting that Bergman was a giant, a master of what one piece referred to as "serious filmmaking." It's a quality that's in short supply today, as movies pander to adolescents real or imagined, always looking for the next smash 'em up, blow 'em up blockbuster. While Bergman was making films, we could always be assured that there would be something out there that offered us a chance to think, to reflect, to discuss in the coffeehouse after the theatre had gone dark.

And when the giants like Bergman go, it gives us an opportunity to reflect, to realize once again that while the screens and the theatres may be larger, the movies are much, much smaller.
Email ThisBlogThis!Share to TwitterShare to FacebookShare to Pinterest
Labels: Movies, Obituaries