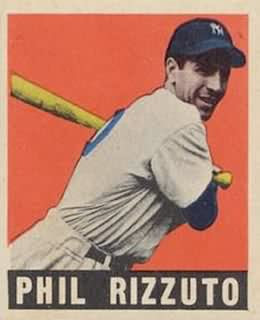 Phil "Scooter" Rizzuto, who died yesterday, was not only a Hall-of-Fame shortstop, a much-beloved announcer, a commercial spokesman for the Money Store, the first mystery guest on What's My Line?, the announcer who coined the phrase, "Holy Cow!" and the unwitting participant in a Meat Loaf song (or, as the Wall Street Journal would have had it, "Mr. Loaf), he was also my boss's favorite ballplayer.

As he tells it, when he was a young lad, in the early 60s, the Yankees came to town to play the Twins. My boss and a couple of his kid buddies went downtown one morning to the hotel where the Yanks were staying. The rest of the kids went for the obvious stars: Mantle, Maris, Ford. But my boss, alone of all the kids, kept looking, camped out near the elevator, until Rizzuto - by then the team's radio voice - came down for breakfast. He asked for Rizzuto's autograph.

"You know who I am, kid?" Rizzuto grinned, looking at the other kids swarming around Mantle and Maris.

"Sure," my boss replied. "You're the greatest shortstop to ever play the game."

Rizzuto beamed. He put his arm around the young boy and asked him if he'd had breakfast. When he said no, Rizzuto took him to the club's dining room, to Rizzuto's own table. He then made an announcement: "I want you to meet my friend," he said, introducing the boy to the assembled ballplayers. "Now, he's going to come around to your table and ask for your autograph, and I'd like you all to help him out."

You'd think that would be enough adventure for one day, but Rizzuto had only begun. If he didn't have any other plans for the day, Rizzuto asked the boy, how would he like to accompany Phil to WCCO, where he would record his radio program. "It was boring as hell," my boss remembered, but that didn't matter. It was his day with Phil Rizzuto.

Before it was over, Rizzuto had given the boy a couple of tickets for that night's game between the Yankees and Twins, and told him to bring his mother along and to stop by the radio booth during the game. They did so, and Rizzuto welcomed them in like long-lost friends. "That's a fine young man you have there," he told my boss' mother.

So he left that day with a book full of autographs from hall-of-famers, a trip to a radio studio, a couple of tickets to a ball game, and a lifetime full of memories. He beams every time he tells that remarkable story.

And it was my boss I thought of yesterday when the news of Phil Rizzuto's death came through. The obits, particularly this gently elegant one from Cliff Corcoran at si.com, seem to have gotten the essence of a man who loved baseball, both as a player and an announcer, a man who both on the field and behind the mic introduced generations to the game and invited them to share that passion. As one commentator put it on ESPN today, there is a special bond between a baseball team's fans and its announcers. (I mentioned this earlier this year in my obit of the Twins' longtime announcer, Herb Carneal.) That bond existed with Phil Rizzuto, and it apparently wasn't limited to those who heard him on the radio; it extended even to those who met him.

I never met Phil Rizzuto, but I know someone who did (which is closer than many may have gotten), and sometimes that's good enough. It's memories like this that remain for a lifetime, in the effect a simple act of kindness can have. It's why our athletes and celebrities are role models, whether they like it or not. It's why they, and all of us for that matter, had better live up to that obligation.

George Steinbrenner, owner of the Yankees, was quoted yesterday as saying something to the effect that Heaven must have needed a shortstop, and so they called Phil Rizzuto. It was an impossibly corny statement, one that could only come from the mystique that is the New York Yankess; and one that, on this day, seemed totally appropriate.