CHICAGO -- In an effort to end the nearly century-old “Curse of the Goat,” the Chicago Cubs today announced plans to sacrifice a live goat in a ritual ceremony designed to appease the baseball gods.

The “Chicagoland Meat Packers Association Reverse the Curse Live Goat Sacrifice presented by Haroldson Foods” will be held between games of a September 8 doubleheader between the Cubs and the Florida Marlins, team officials said. 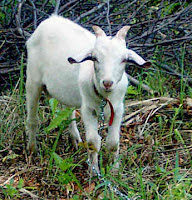 (left) Cubs got your goat? If it's September 8, you'd better hope not.

“After nearly one hundred years, it was clear to the team that dramatic action was necessary,” assistant Publicity Director Ken Randolph said. “We’ve tried blockbuster trades, spending wildly in the free-agency market, and hiring high-profile managers, all to no avail. And even though we’re seeing some signs of life in the team this season, it became obvious as we analyzed our history that something drastic had angered the baseball gods, and that only a blood offering would totally appease them.”

The so-called “Curse of the Billy Goat” supposedly dates back to the Cubs’ last World Series appearance in 1945, when a man trying to attend Game 4 with his pet goat Sianis was denied admittance to Wrigley Field. Subsequent attempts to “reverse the curse” by bringing goats into Wrigley Field have failed to stem the tide of futility and loss which have dogged the Cubs since their last championship in 1908.

“The vengeful baseball god Homeron is clearly not satisfied with our meek attempts at redressing the injustice,” Randolph said. “We concluded that the only possible step available to assuage Homeron’s wrath was to sacrifice a male goat between the ages of 18 months and two years, after which his blood will be drained into a clay pottery bowl and offered up in humility to Homeron, along with a meek plea that he might take pity on the Cubs and remove the curse which he so justly invoked upon us these many decades ago.”

A stone altar will be constructed midway between second base and the center field bleachers. Akwar Abandai, a Verdic priest, will preside at the ceremony, assisted by veteran slaughterhouse butcher Duke Mantel. The ritual sacrifice will be telecast live by Cubs broadcast partner WGN, and will be available via streaming video on the station’s website.

For a city still reeling from the 1979 “Disco Demolition Night” fiasco at Comiskey Park on the south side which resulted in a riot that forced the Chicago White Sox to forfeit the second game of a doubleheader, announcement of the sacrifice brought apprehension to many fans.

Cubs follower Dick Blutus spoke for many, calling the sacrifice “a cheap stunt” and comparing it to “a gimmick the Sox might pull, but unworthy of our Cubbies.” Teresa Sims offered her own concerns about the promotion. “I mean, what’s to keep other bizarre cults and religions from storming the field to offer their own ritual sacrifices?” Sims asked. “I’m all for diversity, but I’d hate to see something like this get out of hand. The Cubs can’t afford a loss, even by forfeit, this late in the season.”

PETA spokesperson Victor Benjamin illustrated the unease with which his group views the Cubs announcement. “Of course, we completely deplore this inhumane treatment of an innocent goat. This announcement by the Chicago Cubs is another example of the corporate influence of American culture, putting greed and profit ahead of the lives of animals. On the other hand, one hundred years is a long time to go without winning the Series. If it works, well, it is only one small goat.” A representative from the Illinois Humane Society said the group would defer comment until November.

Baseball commissioner Bud Selig declined to intervene in the Cubs promotion, issuing a statement that since there were no drug tests in place for animal sacrifices, there was no action he could take. Selig also refused to confirm nor deny that he would be in attendance at the sacrifice ceremony.