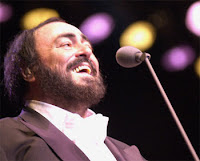 Pavarotti, who died Thursday after a long battle with cancer, was never one of my favorites - Domingo, whom I preferred, will come to be known (if he isn't already) as the great tenor of the era - but there's no denying his ability, nor his fame.

Pavarotti was larger than life - almost literally (which, I think, worked against the belivability factor in many of his supposed "romantic" roles, but then I'm no expert) - he had the talent and charisma of the opera stars of old, and also the ego and personality.

The original Pavarotti obit at CNN is almost a love letter to him, which I think is unfair, not to mention superficial. For Pavarotti was controversial - he frequently cancelled appearances (including what was to be his farewell performance in Tosca at the Met in 2002, which resulted in the debut of Salvatore Licitra), and was essentially fired from the Lyric Opera in Chicago because of his cancellation rate. He was often accused of "slumming" in the pop world with his crossover to the successful Three Tenors and his unsuccessful dabbling in movies (anyone remember Yes, Georgio?). As the obit on NPR pointed out, his fame in Italy was never as great as it was elsewhere (the prophet in his own home, perhaps?) and at La Scala they booed him when he cracked a note. A tell-all book by his former manager Herbert Breslin presented a less-than flattering portrait of the star.

But to point out these controversial aspects of Pavarotti's life is hardly an injustice - it is, really, the stuff of operatic legend, and it was this as much as anything that helped make Pavarotti larger than life. For he did have tremendous talent, and if he did spend too much time on the pop side of the crossover fence, he also brought opera to a lot of people who hadn't otherwise had much exposure to it. Add to that the scent of scandal, the whiff of egomania, the air of unpredictability (Will he show up in good voice? Will he show up at all?) and you have someone in the mold of a Callas.

And so if you're going to celebrate the life of Pavarotti, I think you need to take it in whole, warts and all, as the life of one of the greats, a singer whom the opera world will miss. It's been a tough year for opera, with the deaths of Beverly Sills and Régine Crespin earlier this year, and this will add to it. There are, I think, more talented tenors out there, and will continue to be. But talent is only one part of superstardom - there are many components that cause someone to transcend his field, and Luciano Pavarotti had them all.

UPDATE: Alex Ross, one of our favorite classical bloggers, has a very fine critical appraisal of Pavarotti here. He doesn't fail to acknowledge Pavarotti's style - "the beauty of the sound envelops you, but you’re not conscious of the artifice of art" nor does he shy away from some of the points I raised above:

The pity is that the Three Tenors and the crossover projects that followed had nothing to do with opera as theater. It became a matter of a big man hitting high notes with a smile. Some people have argued that the Three Tenors may actually have harmed opera: for a lot of younger people, the art form ended up looking like Eurokitsch, not something to be taken seriously.

Alex ends on a hopeful note; after commenting on opera's growth even without Pavarotti, he concludes that "we may be moving into a period where platinum-selling vocal celebrities are no longer needed. But a handful of bel canto arias will always be owned by Pavarotti."