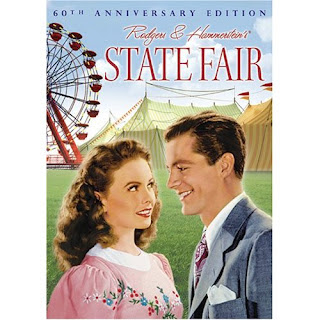 No, not ours, but the Iowa State Fair. Or, to be more precise, the Iowa State Fair of Rogers and Hammerstein's 1945 musical State Fair. It probably shouldn't be considered one of the duo's best musicals, but it remains a charming look at an Iowa farm family, the Frakes - parents Abel and Melissa, daughter Margy, and son Wayne - and their annual trip to the State Fair.

We're going to ignore the ill-advised remake in 1962, a vehicle for Pat Boone in which the story is shifted from Iowa to Texas and the focus moved from from Margy (Jeanne Crain in the original) and her budding romance with newspaper columnist Pat Gilbert (Dana Andrews, in a very smooth - and mostly non-singing - performance), to son Wayne (played by Boone, of course; it was Dick Haymes in the original, who was also a better singer than Boone) and his infatuation with a band singer appearing at the fair (played by Ann-Margaret in the remake, and I'm afraid they have us there). The change not only of locale but of character emphasis fundamentally alters the whole story - it's best to just quietly leave it be.

But in looking at the original, we're going to venture deeply into what I like to call the "what-if" school of film criticism. You know how this works, where as the closing credits are rolling you project either what should have happened (particularly if you're like me, thinking that you always have a better idea than the screenwriters did), or what might happen to the characters if the story were to continue.

In this case, the impetus for "what-if" comes from yet another version of the story which appears as a bonus feature on the State Fair DVD, the seldom-seen 1976 TV-pilot for a State Fair series, an almost unwatchable piece of dreck that evidentally tried to capitalize on the Waltons-type of homespun family drama, with a dose of Dallas thrown in for good measure. The pilot plays its own game of "what-if" to disasterous results, namely: what if the marriage of Margy and Pat fails, and Margy returns to the farm with her troubled son in an attempt to put her life back together? (N.B.: In the pilot, the names of all the characters are changed, thus the Frake family of the movie becomes the Bryant family of the pilot, and Margy's name is now Karen. But we all know who they really are.)

Now, let's set aside for a moment the obvious fact that marriages formed on the basis of a three-day courtship are not necessarily built on the most stable of foundations. Since musicals depend on a certain suspension of disbelief, we'll play along. And so at the end of State Fair the musical, we're left with Margy and Pat embracing on the side of the road, a couple devoted to each other, preparing to head to Chicago and Pat's new job as a columnist (for the Trib? The Sun-Times?) Given that premise, there's no way in hell that this couple is going to split up. This is, after all, a girl that, in the opening song It Might As Well Be Spring, complains about the dullness and predictability of life on the farm and a future marriage to a high-school beau that offers security but little else. In the dashing and mysterous newspaperman Pat, Margy has found - or seems to find - the life she has yearned for. Add to this that by the time of the pilot they'd been married long enough to have produced a son, Tommy. Now, even if this marriage does end, how likely is it that Margy is going to split from Chicago - one of the most exciting cities in the country - for life back on the farm? Particularly if Tommy is the troubled child he appears to be in the pilot - silent, unsociable, a cruel streak, wondering why his parents couldn't stay together. No, if this kid's in that kind of shape, you're going to say in the big city, where he can get the help he needs.

Now, perhaps the writers of the pilot had conflict in mind - you know, make Pat a recurring character, show Margy going through the agonies of divorce, the inevitable custody and support issues, the tantalizing will-they, won't-they suggestion of reconciliation. But there's no evidence in the pilot of any plans to introduce Pat in the series - so, most likely, the split is just a plot gimmick. And if so, one asks why they felt the need to interject such a note of ultimate failure into the happy scene we see at the end of the movie? If you want to break this couple up, it would have made far more sense to simply kill Pat off. And not only does this present us with far more in terms of dramatic potential, it actually gives us a more plausible plot.

In fact, given the evident writing talent that Pat possesses, not to mention his investigative skill (no matter how many people there are on the crowded state fair midway, he's always able to track Margy down), it's easy to speculate that writing a regular column year after year would have become boring to him. He would have felt trapped, wasting his time, yearning to get back out in the field, covering real news, breaking stories. It's no great stretch of the imagination to see him wind up as a war correspondent in either Korea (if you take the time period covered in the movie) or Vietnam (the era of the TV pilot), where he could have died ala Ernie Pyle. Not only does this make more dramatic sense, it also introduces a sensible reason for Tommy's sullenness and cruelty to animals, as he tries to cope with the undoubtedly violent death his father sustained. He would have idolized Pat and thus, if the series had been successful, would have had his own issues with his mother dating, remarrying, etc. A cliché perhaps, but no more so than the ones which the writers of the pilot presented us. It also might explain why Margy would ditch Chicago for life back home (whether Iowa or Texas; take your pick), a place of certainties, much less violent than Chicago.

So in the course of a few paragraphs, we've come up with a successful - or at least credible - backstory that provides at least a little smoother transition from film to television. It didn't take much in the way of effort, but apparently it was still more effort than the writers of the pilot were willing to undertake. Which explains, perhaps, why State Fair remained a pilot, and never a series.

While we're on the subject, it should be noted that as far as I am aware, there are only two 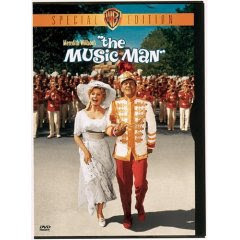 musicals that feature songs referring to a state pronounced Eye-Oh-WAY. The other is, of course, The Music Man, featuring Robert Preston as the immortal professor Harold Hill. (Again, it's probably best if we forget the 2003 remake with Matthew Broderick and stick to the original.) And, undeniably, the Iowa of Harold Hill and the Iowa of Margy Frake are one and the same state. Might we not expect to see the good professor somewhere at the fair?

As I recall, The Music Man takes place in 1912. (Which means you can play your own game of what-if, speculating on how many of the citizens of River City wind up biting the dust in World War I.) And although Robert Preston was 44 when he made the movie in 1962, I've always figured he was supposed to be a bit younger than that. Let's suppose Harold Hill (whose real name, as we find out from his former sidekick Marcellus, is Gregory) is in his late 60s or early 70s at the time of State Fair. Would it be so unlikely that he and his wife, the librarian Marian (Shirley Jones) would be spending some time at the fair, along with, in all likelihood, some kids and grandkids?

If you think about it, the lure of the the Midway and its hucksters (notably Harry Morgan, the conniving barker from State Fair) would have probably been irresistable to Hill, the reformed con man who I'll bet still has some fond memories of the good old days, before he settled down and cleaned up his act. So I'd like to imagine the Hill family (or whatever Greg's last name really is) somewhere in the crowd at the fair, having an ice cream or some popcorn, enjoying the exhibits and reminiscing on what a long, strange journey it's been, and how their state has changed over the years. Perhaps if you look carefully you can see them out there.

It's nice to think, at any rate, that these two movies inhabited the same state of Iowa. One actor even appears in both movies - Harry Hickox, who as an anvil salesman tries to blow the whistle on Hill, but by the time of State Fair has become a sideshow barker hustling people into a girlie show. (Well, both characters do have an eye for the trim ankle.) And if that doesn't prove that The Music Man and State Fair both come from Iowa, I don't know what does.

Email ThisBlogThis!Share to TwitterShare to FacebookShare to Pinterest
Labels: Movies