If It's on the Web, It Must Be True

The big news in sports today is not that Isiah Thomas was found guilty of sexual harrassment. No, the big news is that, according to CNN, there's apparently a new NBA team we weren't aware of, and in the Big Apple, to boot.

It's a team called the New York Nicks (short, one presumes, for Nickerbockers). Is this team owned by Nickelodeon, perhaps? Or maybe, because the team isn't very good, it's their way of saying they aren't worth a plugged nickel.

This obvious typo in the headline has been changed since the initial posting, but thanks to the miracles of technology, we were able to capture the original screenshot: 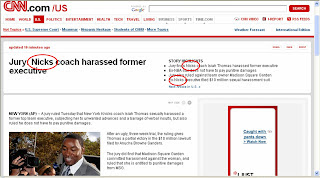 It probably didn't long for the editors to find this, although I'm somewhat at a loss as to why they didn't catch it in the first place. But, harking back to what Steve wrote about a couple of weeks ago (the "debarked" dog), it really gives you confidence in our media, doesn't it?
Email ThisBlogThis!Share to TwitterShare to FacebookShare to Pinterest
Labels: Media, Sports