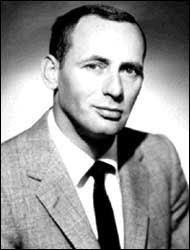 Well, they're all gone now, the Rat Pack. Frank, Deano, Sammy, Peter (we hardly knew ye) and now Joey. And there isn't really anybody to replace them, is there?

Peter Lawford was probably the least well-known of the five, but one could argue that he also had the least visibility within the Pack. Most people, when they think of the Rat Pack, think of the Vegas shows - Dean doing his drunk act, Sammy jumping into Dean's arms when he wasn't tearing up the stage with his singing, dancing and impressions, and Frank being, well, Frank.

With a trio of larger-than-life personalities like that, it was easy for a laid back performer like Joey Bishop to fade into the background. And yet Sinatra knew better. He called Bishop "The Hub of the Big Wheel," and he was right. Joey Bishop was the professional, the sane one in a portrait of joyful insanity, the glue that held the whole thing together. Watch his marvelous comic timing when you get a chance, his deadpan expressions, his easy way with one-liners. Perhaps it's no surprise, then, that Joey Bishop was the last of the Rat Pack, the one who outlived them all. As long as Joey was alive, it was somehow possible to believe that the Rat Pack still lived, that we were all young and hip, finger-snapping and swinging our way through life.

There was more to Joey Bishop than the Rat Pack, of course. He was a successful nightclub comedian, a not-so-successful sitcom star, and a longtime talk show host. For a generation, in fact, he was probably best known as Johnny Carson's perennial substitute, pinch-hitting for him over 200 times. And, in fact, from 1967 through 1969 he went head-to-head five nights a week as Carson's competition, hosting his own talkfest on ABC. (Fact number one: Joey's sidekick was the young Regis Philben. Fact number two: the first guest on Joey's show was none other than California Governor Ronald Reagan, who due to a scheduling snafu was 14 minutes late to the live telecast.)

The February 24, 1968 issue of TV Guide offers a profile of Bishop that provides us with a fascinating behind-the-scenes look at the talk show. However, it also gives us a portrait that is at odds with the conventional wisdom surrounding Bishop's show. For the conventional wisdom is that Carson was insurmountable, that Bishop's show was merely one in a long line of failed attempts to challeng the King of Late Night (preceded by Crane, soon to be followed by Cavett, Griffin, Thicke, Sajak, Rivers, Hall, et al). Brooks and Marsh, in their indespensible Complete Directory to Prime Time Network and Cable TV Shows, state that "Joey limped along for more than two years, never posting much of a threat" to Carson. According to CNN's obit, "despite an impressive guest list and outrageous stunts, Bishop couldn't dent Carson's ratings." And that, as I said, has become the established school of thought.

Except, according to Richard Warren Lewis' TV Guide story, it wasn't necessarily so. It was true that Bishop premiered on April 17, 1967, and that it wasn't met by a great deal of enthusiasm. (One-third of ABC's affiliates chose not to air the show at its premiere.) The critics of the time pronounced it a "turkey."

But, slowly, it started to turn around. As Lewis notes, "Six months after that shaky start, Bishop was seriously challenging Carson both in the battle for ratings and late-night advertisers' dollars." (Emphasis added.) According to the industry experts, Bishop had found a unique niche, a "totally different audience" that the urbane Carson (who, ironically, was thought to face the same challenge when he replaced Jack Paar, who at the time was seen as far more urbane than Carson). While Carson appealed to the sophisticated viewer, Bishop's audience resided in the outlying areas, the Bible Belt, flyover country.

Big names of the time such as Gregory Peck and Omar Sharif appeared on Bishop's show. Paar himself came out of semiretirement to trade jokes for an hour. When David Janssen, on the night of The Fugitive's final episode, appeared live with Joey, the ratings topped Carson's in New York for the first time. The picture painted by Lewis' article is an optimistic one, of a show on the rise, a show to be taken seriously as a threat to Carson's five-year run of supremacy.

Granted, it must not have lasted. By the end of the next year Bishop was gone, replaced for 1970 by Dick Cavett. I wonder why. Was it only ratings - had Bishop's numbers reached a plateau in 1968, only to fall back? Could it be that ABC, taking a page from CBS's strategy of the late 60s, had decided to cast aside the less demographically appealing (not to mention lucrative) rural and Midwest audiences and challenge Carson's hold on that urbane market? (In fact, ABC was to dump the still-successful but demographically-challenged Lawrence Welk show in 1971.) Did Bishop himself tire of the talk show grind cutting into his successful nightclub bookings? I'm sure the answer lies somewhere within a wealth of printed material that's probably buried on microfilm in some dusty library.

Lewis' story itself is not without its flaws; he makes a point of referring to Bishop's custom of wearing a black tie for every show since a priest had presented it to him on opening night, yet on the cover of the issue, Bishop is pictured behind the host's desk, interviewing a guest, wearing a red tie. So I suspect that, as is so often the case, the truth lies somewhere in between.

One thing is sure, however. Bishop's show was not the unmitigated disaster, the eternally ratings-challenged program that many make it out to be. And so perhaps we should be a bit kinder to the memory of Joey Bishop's talk show, and smile as indeed we do whenever we remember his presence with the Rat Pack, and remember what it feels like to be young again.

UPDATE: My good friend Badda-Blogger has a nice tribute piece to Joey as well - well worth reading, as he usually is.

While we're at it, we should note that Deborah Kerr also died. She was nominated six times for Best Actress, yet only won an honorary award from the Academy. You probably remember her dancing with Yul Brynner in The King and I, or groping with Burt Lancaster on the beach in From Here to Eternity. As CNN put it, she "played virtually every part imaginable from murderer to princess to a Roman Christian slave to a nun." She was married to the novelist Peter Viertel, author of White Hunter, Black Heart (based on the making of the movie The African Queen; later made into one of Clint Eastwood's best non-Dirty Harry movies).

Deborah Kerr had a great career in some of the biggest movies of the time, and she did it with class.