In 1982, college football was regulated on television to one supposedly national broadcast, but ABC restricted coverage of games to just one regional game, similar to today’s ESPN regionalized broadcasts, and it was not until 1984 when major conferences broke off to form the College Football Association for television broadcast rights. (That was disbanded after 1994; starting in 1995, conferences set their own television rights; today, only the Southeastern Conference has a guaranteed nationally televised game of the week, because of the SEC’s deal with CBS; the ACC, Big 12, Pac-10, Big Ten, and Big East, the “BCS Conferences,” have regional games on the ESPN Broadcast Network, and one selected game is the ESPN Game of the Week, but varies by conference.) As a result, television did not air college football the way they have in today’s television.

Meanwhile, the National Football League was on strike, and the television networks filled the void with boxing telecasts. Professional boxing dominated network television for most of the fifty-seven day strike, with teams such as Marv Albert and Ferdie Pacheco (NBC), Tim Ryan, Gil Clancy, and Ray Leonard (CBS) dominating the airwaves calling boxing matches. (ABC was a one-man show with Howard Cosell calling boxing matches – no analysts.) 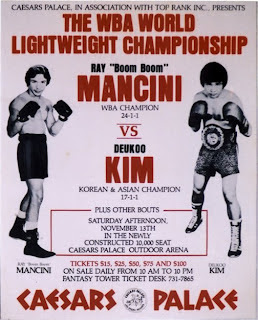 That led to one of the most infamous fights in the history of the sport, twenty-five years ago on this day. CBS had the World Boxing Association Lightweight Championship bout between Ray Mancini (Youngstown, OH) and Duk Koo Kim (South Korea) on this, what was the final weekend without NFL football as a byproduct of the 57-day strike.

Kim, the South Korean challenger, had fought 19 fights, all in Asia, and struggled to make weight (135 pounds) for the fight at Caesars Palace, and wrote in Hangul on his hotel room, “Live or Die,” and had a miniature coffin placed in the hotel.

The fight was regarded as one of the best battles in the sport of boxing for much of the first twelve rounds; Kim had only been to 12 rounds twice; Mancini had five matches of 12 or more rounds (1 of 12, 1 of 14, 3 of 15). That led to Mancini’s pummeling of Kim in the 13th round, and when the fight continued into the 14th round, Mancini sent Kim to the canvas, who recovered, but referee Richard Greene stopped the bout.

Kim collapsed into a coma shortly after the fight, and had emergency brain surgery. It was not to be, however; Kim was taken off life support and died five days later.

Controversy over the fight would dominate for the next four weeks. A week after Kim’s death, a bout between Larry Holmes and Randall (Tex) Cobb was so lopsided that ABC’s Howard Cosell blasted the referee of that fight, knowing the circumstances of the previous week that greatly affected him. Two weeks after Holmes-Cobb, the WBA Heavyweight Championship fight between Michael Dokes and Mike Weaver, with Joey Curtis as referee, ended in severe controversy, also at Caesars Palace. The Nevada State Athletic Commission that governs the sport in the state warned all boxing officials to be aware of a fighter’s health at all times after noticing Greene did not do an adequate job of it during the Mancini-Kim fight. Curtis did by stopping the Dokes-Weaver fight at 1:03 of the first round when he thought Weaver was in severe trouble. A rematch was ordered when officials questioned why Curtis had stopped the fight early, which turned out was the byproduct of the Mancini-Kim fight fatality.

Fourth months later, Kim’s mother committed suicide, and by July of 1983, referee Greene did the same.

In the meantime, modern boxing regulations reduced the length of championship fights from 15 to 12 rounds, adopted the Standing Eight Count, permitted the referee and ring physician both to stop fights, and popularized the three-knockdown rule.

Sport can often change with major moments. The Mancini-Kim fight showed an example, twenty-five years ago today, how a sport can be affected, and be overhauled, by one major incident, such as this tragedy.