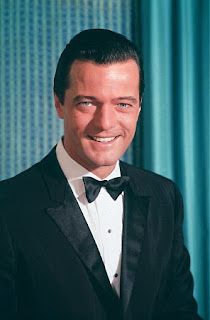 Some might remember him as the star of "Bob Goulet's Cajun Christmas;" to others he was "Mr. G" on ESPN's promotions for college basketball; and those us of an age will recall his muffing the lines to the National Anthem at the Clay-Liston title fight in 1965. (An incident he always handled graciously and with humor, pleading that he was, after all, from Canada; true enough, although he was born in Lawrence, Massachusetts.)

But Robert Goulet was also a star on Broadway, a frequent guest of Sullivan and Paar and Carson, a star of countless TV specials, and an unforgettable Lancelot in his most famous musical, Camelot. It was during the 60s that he became a familiar face to millions, and it is that image that I chose to go with in remembering him, in the week that he died of pulmonary fibrosis at age 73 while awaiting a lung transplant.

He had a smooth voice, a winning presence, an engaging personality. Many of his best moments, as in Scrooged and the ESPN commercials, came when he was spoofing himself. He was always a delight to see and listen to, whether voicing Jaune-Tom in the cartoon Gay Purr-ee, or himself in The Simpsons. He was the kind of star that doesn't seem to be around anymore, and the entertainment business is the poorer for it.

In If Ever I Would Leave You, his most famous song from Camelot, he sang to Guinevere,

But if I'd ever leave you,
It couldn't be in autumn.
How I'd leave in autumn I never will know....