Selig Stunner: "I Used 'Roids"
MLB Commish Admits He Too Was On the Juice

(Milwaukee , WI)—December 14, 2007—Bud Selig acknowledged for the first time today that he, too, had taken steroids during his time as Commissioner of Major League Baseball. Unnamed sources had earlier claimed that Selig confessed his usage to former U.S. Senator George Mitchell as part of Mitchell’s probe of steroid use in the major leagues in the last decade. Today was the first time Selig personally acknowledged those reports were true. 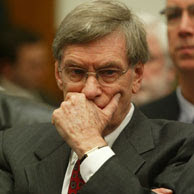 (Left) Baseball commissioner Bud Selig, pondering the future after admitting he had been implicated in his own probe of performance-enhancing drugs in baseball.

“Look at me,” said Selig, in an angry, some said almost "‘roid rage" tone, at his press conference this morning. “I’m a pretty wimpy guy, not much meat on my bones. It might have been enough to run a mediocre baseball club in Milwaukee, but it sure as hell wouldn't do in New York. How was I going to stand up to guys like Steinbrenner and Pete Rose and Donald Fehr and all the rest of them? I needed something extra to give me a boost, and steroids is where I turned. Sure, it wasn’t right, but I had to do something. And, by God, it worked.”

Selig pointed out that the extra confidence led to some of his finest moments as commissioner.

“Remember that All-Star game in Milwaukee , when I had to decide whether to call off the game or keep it going in extra innings?” he asked rhetorically. “The ol’ Bud would have just caved in, or maybe just crawled under my seat until they stopped yelling at me. But not Bud on the juice. I was able to stand up to the whole world, Fox Sports and everybody, and boldly call the whole thing a tie. I definitely grew a new set of them that night.”

Selig admits, however, that what he did was wrong and that he thinks he won’t do it again. “We must set a good example for the youth of America . They need to know that taking these illegal drugs is wrong and that it really won’t help you get ahead in life. Sure, many of the players on the Mitchell list are hundreds of millions of dollars richer today than they would have been, and some will still make it to the Hall of Fame. But are they happier for it? I mean, really.”

Email ThisBlogThis!Share to TwitterShare to FacebookShare to Pinterest
Labels: Sports, This Just In